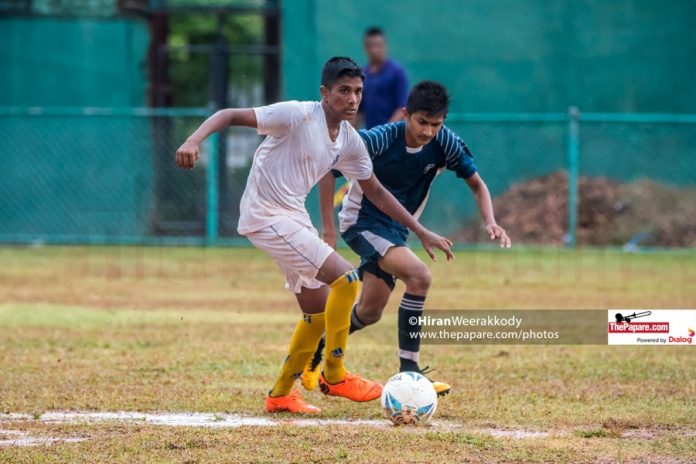 In a hard-fought encounter, Royal College came out with all three points, 2-1 against De Mazenod College in the U18 Division I Schools’ Football Championship 2018 at the Janaka Ranawaka grounds.

Zahira in a narrow win against Royal

De Mazenod kicked off the game and was immediately on the attack with a shot outside the box from Pramod Dilshan helped by a miss-kick from the Royal defender I. Manafdeen. In the early stages DeMazenod were better in going forward even though the game was scrappy at the start.

In the 6th minute Royal had a corner taken by S. Prabudda which he curled towards the goal and just went over. It was a shot in warning for what was to come. Both teams seemed settled after the first 10 minutes and started to play a passing game when in possession.

Avishka Deshan who had a stellar game for the Kandana boys had his first shot at goal which the Royal goalkeeper B. Balakrishnan held comfortably. Pramod Dilshan then had another ball inside the box and was poor with the finish.

Prabudda then showed his skills with the perfectly weighted free kick from 25 meters out. He curled it to the left corner. Mazenodian goalkeeper Pavan Himsara was in a good position to save however failed and let the ball through. Royal went ahead with the goal and started to be more adventurous in attack.

In the 25th minute De Mazenod got a good opportunity to equalize with a cross from Shenon Payoe which Pramod failed to take the shot. Avishka Deshan lobbed in a sumptuous ball towards the Royal goal, two Mazenodian forwards failed to make contact letting Royal off the hook.

All missed chances came back to haunt the Mazenodians in the 35th minute when Prabudda collected the ball outside the box shifted inside sending the defender the wrong way. He then sent another curler to the right corner giving Pavan Himsara no chance.

As the heavens opened it made the second half more interesting as the visitors, De Mazenod attacked relentlessly from start to end. Except for couple of instances Royal barely left their half and had numbers in defense.

Joes outbattle Royal in a goalfest

St. Joseph’s College came out on top against Royal College with the match ending 6-3 …

Avishka Deshan was in the center of all the attacking play De Mazenod made and Royal were not able to stop his passes to the attacking three. Royal was kept in the game by their goalkeeper B. Balakrishnan who made multiple saves from the Mazenodian attacks.

Dilshan had several chances when he was free on goal but it was Balakrishnan who came on top with the saves.

Despite the down pour Mazenodians kept coming at pace into the Royal box who defended stoutly. Some poor passes and finishing along with Balakrishnan heroics kept De Mazenod at bay.

10 minutes before the final whistle Dilshan was free on goal which looked surely to be scored, however Balakrishnan had other ideas and saved brilliantly. In the 92nd minute once again it was the same pair and the Royal custodian came out on top once again.

Finally, the consolation goal did come in the 93rd minute when Dilshan, this time around beat Balakrishnan with a neat chip.

ThePapare.com Player of the Match – B. Balakrishnan (Royal College)

Sri Lanka women fly to Bhutan for SAFF U15