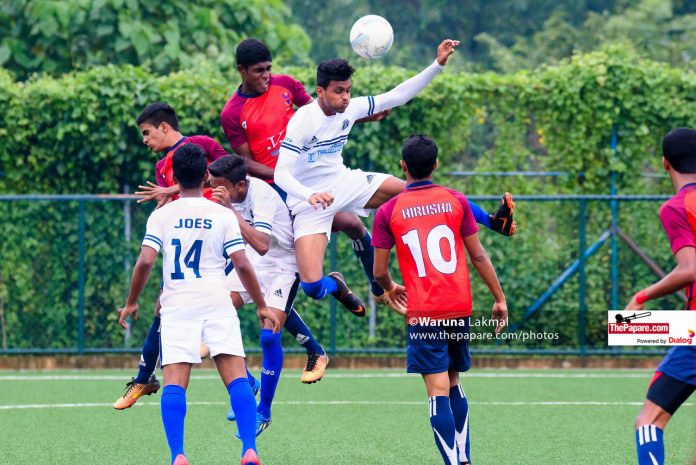 Kingswood College Kandy held the much fancied St. Joseph’s College Colombo to a thrilling 2-2 draw at the ThePapare Football Championship under 20 Group A match played at Beddagana Football Complex, Colombo.

The boys from Kandy kicked off proceedings and tried to go on the attack almost immediately.

Sri Lanka Schools Cap Hirusha Sampath was the spearhead of the Kingswood attack and was full of running off the long ball. The first opportunity came the way of Kingswood when a free kick was awarded just outside the box for a Josephian hand ball.

Hirushs Sampath who hit a low shot getting a deflection off the wall ended up in the back of the net giving the Kandy Lads the lead in the 5th minute.

The Josephians looked rattled and could not get into their A game as the Kingswood midfield and defense cleared off any threatening balls. They looked to counter through Hirusha Sampath who had gas to burn.

In the 14th minute the Joes almost took the lead with a header from Asela Madushan only to be cleared off the line with a bicycle kick by Skipper Chamod Ishara.

From then on it was a show by Kingswood goal keeper Janith Rathnayake who made stops from the boot of Asela Madushan, Shenal Sandesh and Chamath Rashmitha.

In the 25th minute Janith Rathnayake was given a  yellow card for a foul on Asela Madushan where the latter was stretchered off to hospital.

In the 42nd minute all the hard work for Joes paid off when Kavinda Rupasinghe slid a ball to Chamath Rashmitha to equalize from close range.

Soon after the Joes went on the attack once again and were rewarded when Chalana Pramantha exchanged passes with Shenal Sandesh and slotted to the far post to give Joes the lead.

The Joes looked more dominant in the early part of the second half and looked to hold on to possession. Their midfielders were more composed on the ball as Kingswood chased the game.

A sloppy defensive error by Prabodha Madushanka proved costly as Kingswood hit back to equalize through Deshan Koralage. He found Joes Keeper Marshal Kodikara rushing out from his line to cover the defensive lapse, and expertly drove to the far post with a diving effort.

With the game in the balance it was Joes who pushed hard for a win whereas Kingswood looked to secure the point.

Janith Rathnayake made consecutive saves to keep the Kandy boys in the game. The Josephians on the other hand failed to convert easy goal opportunities. Kavinda Rupasinghe and Shenal Sandesh being the guilty party as they missed sitters in front of goal.

In the closing stages Shenal Sandesh found himself inches away from goal and his kick hit the cross bar instead of the empty net proving the day did not belong to the Josephians.