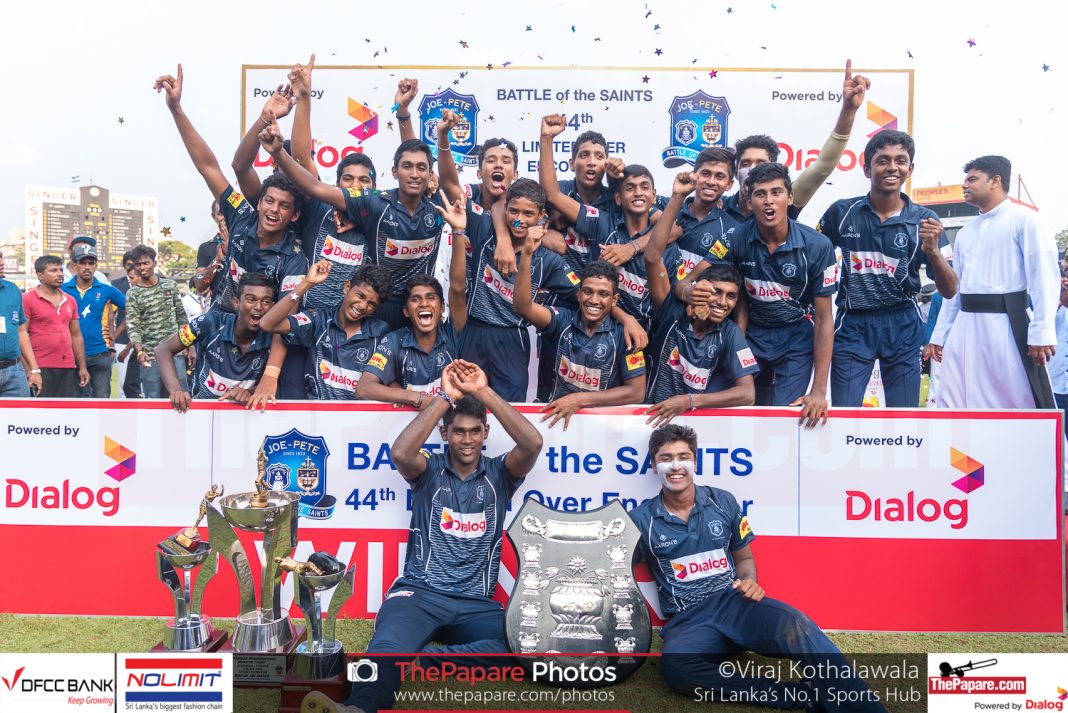 The Josephian-Peterite limited overs encounter which is the longest running Limited Over encounter in the country and played for the Rev.Fr. Peter A. Pillai trophy was worked off for the 44th consecutive year at the SSC grounds in Colombo on Saturday.

The Josephian skipper and Sri Lanka U19 vice captain, Jehan Daniel called correct at the toss and the Josephians batted first on what looked like a good track to bat on. Johanne De Zilva fell early to the left arm spin of Miflal Ameen but experienced campaigners Revan Kelly and Nipun Sumanasinghe resurrected the innings with both batsman making half centuries. Skipper Daniel hit a couple of lusty blows during his short stay but he fell to some canny bowling from Ameen.

The Josephians struggled during the middle overs to gain any momentum but 15 year old Dunith Wellalage gave the innings much needed impetus with a fluent 37, though his dismissal sparked a mini collapse as the Josephians were all-out for 259 after being 237/5. Ameen, Santhush Gunathilaka and Shivan Perera all picked two wickets apiece for the Peterites.

The Peterite run chase got off to a horror start with their top order bar skipper Gunathilaka being dismissed in quick succession as they were reduced to 3/06. Jehan Daniel had his tail up for the Josephians dismissing both right handers with in-swingers to trap them in front while Lakshan Gamage picked up the first wicket to fall.

It was a grand recovery from there onwards for the Peterites through Gunathilaka and Ranmith Jayasena as the duo initially took time before starting to break free as they added 103 runs for the fourth wicket. Then came the most telling point in the match when Jehan Daniel brought himself back into the attack to capture the vital scalp of Jayasena who was unfortunate to be dismissed on 48.

The other Daniel (Ashain) also got into the act as he dismissed the Peterite skipper who was looking well set for a big one to put a halt to the Peterite run chase. The boys from Bambalapitiya never really recovered from there onwards as they eventually folded up for 172 handing a massive 87 run victory to the Josephians.

Ashain Daniel was unfortunate to not pick a five wicket haul but he ended with outstanding figures of 4/32 while captain Jehan Daniel picked up the last wicket to fall to end with a stunning 4/21 as the Josephians recorded a win in the series after 2014.

Jehan Daniel and Ashain Daniel were named man of the match and best bowler respectively while Revan Kelly won the best batsman’s award for his crucial 59. Sulakshana Fernando was named best fielder in the match for his catch and an amazing run out while Santhush Gunathilaka and Ranmith Jayasena won the award for the ‘partnership of the match’.