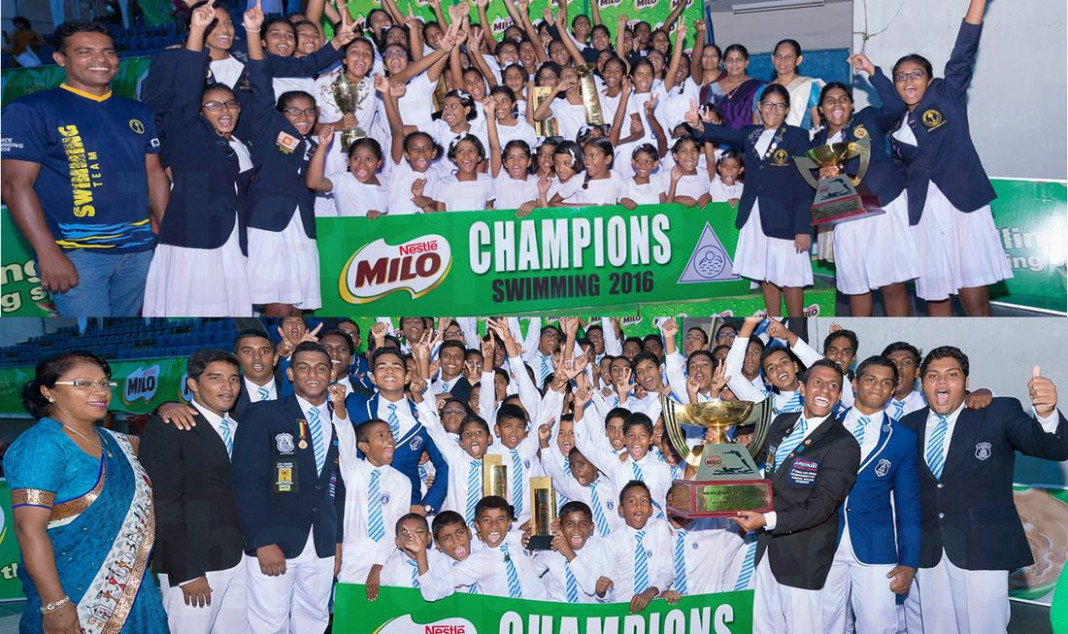 Reigning as champions for the 13th successive occasion the Josephians secured a record-breaking tally of 514.50 points to secure the top spot in the Boys championship while Mahamaya College Kandy secured their 18th back to back victory in the school swimming arena amassing 470 points.

In second place in the Boys category was Royal College with 331 points and Ananda College took the third spot 176 points. Visakha Vidyalaya was placed second in the Girls with 279 points while Musaeus College obtained the 2nd runner up position for their points aggregate of 179.5.

The 43rd edition of the Sri Lanka Schools Age Group Aquatics Championship saw a start on the 23rd of June with the participation 179 schools with a staggering participant count of 2717 swimmers at the Sugathadasa Indoor Swimming Complex.

Leading from the first day, the two top schools were uncontested for the title with both schools dominating the age categories from the under 15 level to the under 21 stage.

It was a whitewash for the Mayans from Kandy winning all the age category titles on offer as the team secured team wins in the under 15, under 17 and under 19 categories. St. Joseph’s College missed out on one single category but were able to win in the under 15 and under 19 age groups. The Under 17 age group was taken by Lyceum International Wattala while Joes were placed third.

The final day of the swimming championship was primarily dominated by the relay events while few other finals of the individual events also saw a conclusion. Mahamaya dominated almost 75% of the relays setting new meet records on the way.  However, the highlight of the Girls relays was the Under 19 400m Freestyle Relay where Ladies College set a new record by finishing in a duration of 4:48.22 minutes. The earlier record belonged to Mahamaya College for 5:03.25 minutes. Mahamaya took silver in the event finishing milliseconds behind with a timing of 4:49.48.

It was complete dominance in the Under 15 400m Freestyle event in which Mahamaya College listed two relay teams and the two teams took the 1st and 2nd places. The Josephians also had their victories to celebrate in the relays with their Under 15 team setting a new record in the 400m Freestyle with a timing 4:01.36 breaking a 2-year-old record. The other events of the relays were distributed among the schools of Royal College and Lyceum International School Wattala but neither of the schools collected a total to surpass the Josephian tally.

In the Diving championship, it was Royal College who took major honors with winning the silverware amassing 207 points while Bishop’s College were the Girls champions with 98 points.