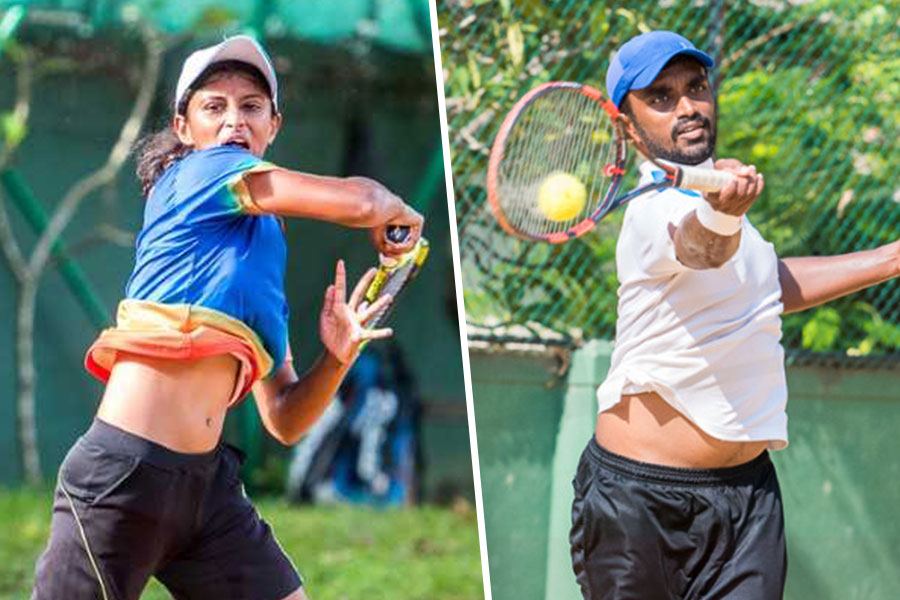 Making his comeback in one of the top events in Sri Lanka Tennis, the SSC Open category 1, Thangarajah played poker with his fitness levels. The champ couldn’t be put down as he stunned the juniors at their peak to take home one more National level title.

With the unpredictable weather conditions in Colombo, the clay court at SSC wasn’t its usual surface. But with years of experience and maturity under his belt, Thangarajah made it through to the final with comfortable wins. Between him and his championship, stood Yasitha De Silva, fellow Davis Cup teammate.

Thangarajah was on top of his game from the get-go but 21-year old De Silva didn’t let him have it without a fight. After conceding the first set to Thangarajah in a tie breaker 7/6 (5), De Silva came back from 5-3 down in the second set to push it to another tie breaker. Thangarajah, playing completely on experience, calmly held off young De Silva with 7/2 in the tie break.

Following her mentor’s footsteps, 14-year-old Anjalika Kurera secured the Women’s Open Singles title. Hailing from Ave Maria Convent, Kurera has been a big achiever ever since she started the sport. She has represented Sri Lanka in many ITF u-14 and 16 competitions and is a top 2 player in the Sri Lanka National Junior Fed Cup team.

Starting as the 3rd seed in the Women’s Open main draw, Kurera crushed her opponents with impressive scores on her way to the final. She beat bottom seed and Senior Fed Cup representative Savini Jayasuriya in the semifinal with ease, 6/2, 6/1.

Top seed Familian Janali Manamperi stood no chance against Kurera, as she took home the women’s final 6/1, 6/1. Anjalika’s journey in the Girls U14 and 16 singles as she faces the quarterfinal and round 2 in the slow going junior events.