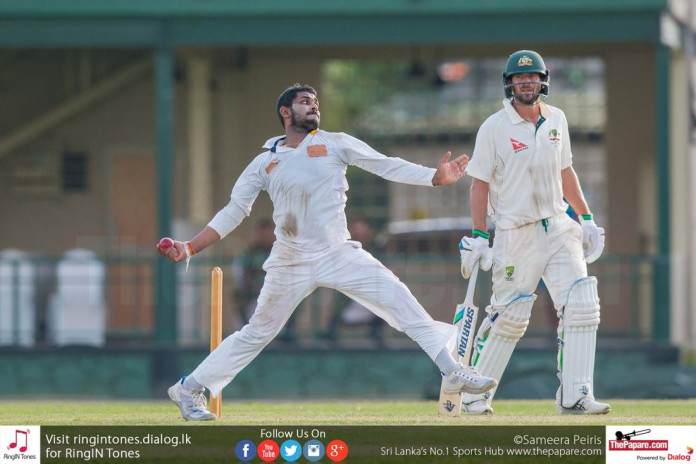 The Australians warmed up ahead of their first Test next week as they clobbered the Sri Lankan XI bowling to all parts of P. Sara Oval stadium on day two in their tour game on Tuesday.

Resuming from 127 for 1, the visitors added another 304 runs on a hot and humid day to end on 431 for 9, leading by 202 runs. Joe Burns, Steve Smith and Steve O’Keefe stroked half-centuries for the Aussies while the hosts’ off-spinner Shehan Jayasuriya grabbed a five-for.

The overnight batsmen, Burns and Usman Khawaja continued in their merry way in the opening session before the former was castled for 72 by left-arm seamer Vimukthi Perera who came from round the wicket to disturb the woodwork.

Skipper Smith and Adam Voges continued to build momentum as they commenced play after lunch on 193 for 3. Smith was ferocious against anything wide and short as he raced to 57 off 98 deliveries before Chathuranga De Silva trapped him right in front of the stumps ending their 88-run stand for the 4th wicket.

In the very next over, Voges was clean bowled by Jayasuriya for 43 as the visitors lost two wickets in quick succession. Mitchell Marsh and Peter Nevill made identical scores of 25 before falling to Jayasuriya and seamer Dasun Shanaka restricting the World No.1 Test team to 335 for 7.

O’Keefe who bagged a five-wicket haul yesterday pressed hard for a Test recall as he partnered up with Mitchell Starc to add 59 for the 8th wicket. Starc bludgeoned 3 sixes during his blistering 48-ball 45 before miscuing Jayasuriya’s off-spinner to end his entertaining knock.

Jayasuriya pocketed his 7th five-wicket haul when he got the better of Nathan Lyon in the dying stages of the third session as O’Keefe continued to annoy the hosts’ bowling attack with an unbeaten 62 from 112 deliveries.

The match will be continued tomorrow for third and final day’s play.