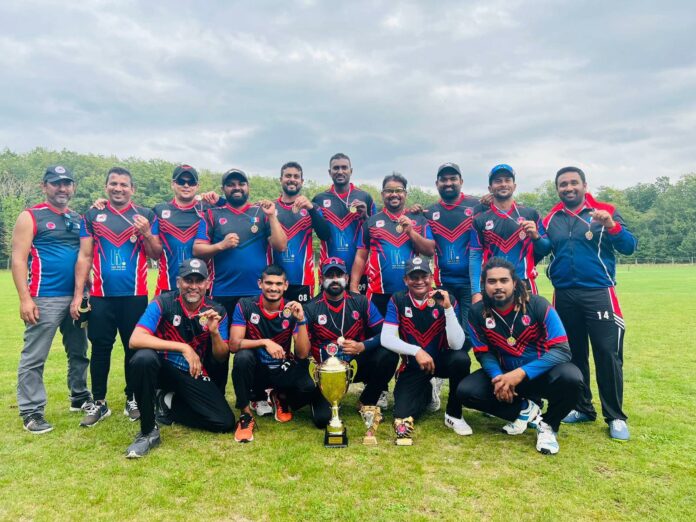 ‘AS EVRY’ team which features several Sri Lankans emerged champions of France Cricket League – Regional T20 championship as they defeated ‘UIF EVRY’ team in the final of the tournament worked off yesterday (25th).

‘UIF EVRY’ team batted first and posted 139 runs for 9 wickets in the allotted 20 overs. ‘AS EVRY’ team chased down the target in 18.5 overs losing only 4 wickets. The skipper of ‘AS EVRY’ team Deshan Jayasinghe played a match-winning knock scoring 55 runs off 30 balls with 4 fours and 3 sixes.

Mahesh Kumara of ‘AS EVRY’ team a product of Sri Devananda College, Ambalangoda became the top run-scorer of the tournament scoring 241 runs in 6 innings.

Meanwhile, Roshan Pradeep a past pupil of Sri Devananda College, Ambalangoda picked up 9 wickets in 4 innings securing 7th place among the top wicket-takers of the tournament. Pradeep’s best bowling figures stand as 4 wickets for 20 runs.

Prasad who impressed with the bat has been exceptional on the field as he managed to hold onto 9 catches leading the chart for the most catches of the tournament. Dulan Perera, a product of St. Thomas College, Matara was also impressive on the field where he caught 7 catches and effected a stumping reaching second place on the chart for the most catches.

‘AS EVRY’ team which emerged champions of the tournament features several Sri Lankans.