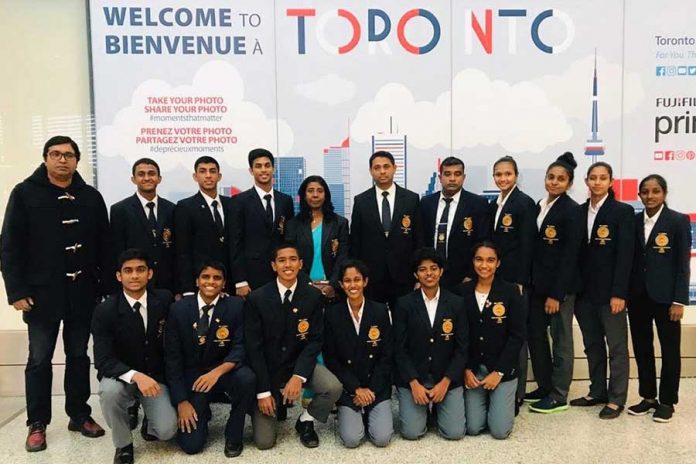 A team of 13 Junior shuttlers came in 16th place out of the 40 teams that participated at the World Junior Badminton Championship 2018. The tournament was held from the 5th to 18th November in Markham, Canada.

Fund deprivation and disturbed training schedules only prompted the team to strive for better and better they did. Together, the youngsters reached 16th place out of 40 teams, an achievement that records an honored milestone for Sri Lanka Badminton.

The team comprised of 6 boys and 7 girls, including Sri Lanka’s pride at the Youth Olympic Games, Hasini Amalangodage.

3 Boys participated in the Men’s U19 event, Nadun Punchihewa, Sewmina Gunathilleke and Dumindu Aeywickrama. Dumindu Abeywickrama was the only standout for the Lankans who managed to win his first match against Poland’s Mikolaj Szymanowski in a three setter.

However, he faced an inevitable exit in the 2nd round to a Hong Kong player. His teammates Punchihewa and Gunathilleke faced defeat in their opening matches and failed to proceed in the singles event.

Dilmi Dias, Hasini Ambalangodage and Amanda Jananuwani represented Sri Lanka in the Girl’s draw. Much like the boys, just one of these players proceeded through to the 2nd round, which was Hasini Amalangodage.

Ambalangodage defeated Malena Norman of Sweden in her 1st round meeting in a thrilling three setter, only to go down to Korea’s So Yul Lee in the 2nd. Unfortunately, Dias and Jananuwani lost their first-round matches and saw an early exit in the tournament.

The Girls fared relatively well in the doubles, with Dilmi Dias and Anurangi Masakorala reaching the 3rd round in their 128 applicant draw. Receiving a Bye in the 1st round, the pair won their 2nd round match against the Spanish in straight sets. They lost to Aditi Bhatt and Tanisha Crasto of India in the 3rd round 22/20, 21/10.

Amanda Jananuwani and Thanushi Ratnayaka too entered in the event but couldn’t record a single win. Their Bye in the 1st round got them through to the next yet couldn’t hold their own against a Chinese pair.

Two pairings in the Boy’s Doubles event saw both knocked out in the 2nd round of the draw. Sewmina Gunathillaka and Gavin Moragoda lost in a three setter to a team from Italy while Chamath Dias and Chirath Illeperumachchi was defeated by an English duo in straight sets.

Of the 3, Hasini and Chamath managed to record 1 win against an American pair in a three setter before exiting the tourney courtesy, Indonesia. Both other pairings couldn’t manage any wins and had to settle with their starting positions in the first round.

Sri Lanka’s greatest performance came out of the Team event, which consisted of 9 teams of 4-5 countries each. The Lankans were placed in Group E along with India, Faroe Islands, Kenya and Algeria. With a No-Show from Algeria, the four teams played their group stage matches in a Round-Robin format.

India awarded a 5-0 thrashing to the Lankans in the opening fixture. But the spirited team picked up pace against the Faroe Islands and rebooted with a 5-0 victory.

Sri Lanka did not spare Kenya a single win in their final Group Stage match, beating them 5-0.

With the automatic 5-match win from Algeria, Sri Lanka finished 2nd in the group behind India. This landed them in the final stage playing for the 9th – 16th position. Along with Sri Lanka were Scotland, Singapore, England, Hong Kong China, Thailand, Sweden and France.

Unfortunately, Sri Lanka could not record any wins here and had to settle with a 16th place finish. This achievement is the highest a Sri Lankan team has attained in the World Junior Badminton Tournament.