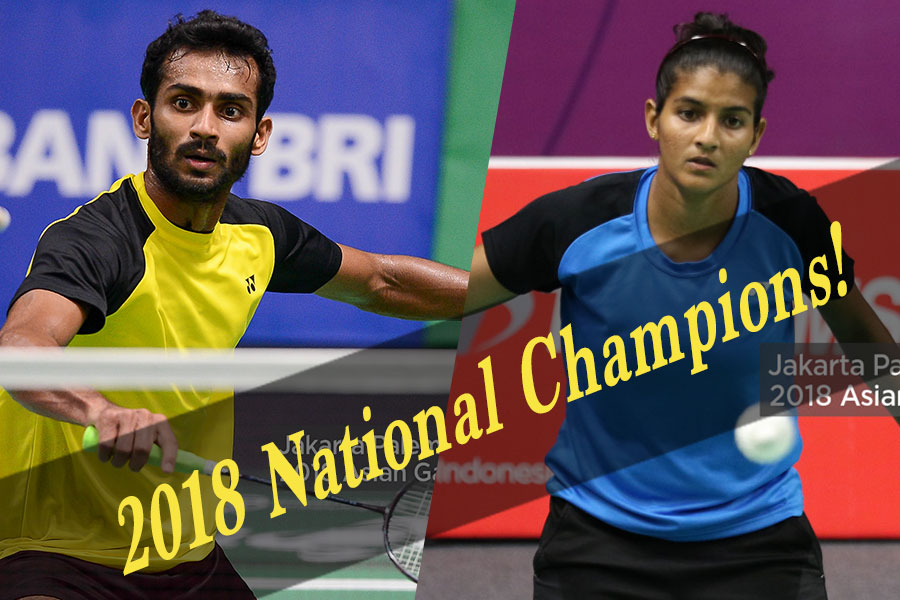 Lead up to the Finals of the 2018 National Badminton Championship

15-time National champ, Niluka Karunaratne faced an upsetting exit in the first round at the hands of Buwaneka Goonethilleka. Carrying the Karunaratne name was younger brother Dinuka, who managed to see through all the way to win the 66th National Men’s crown.

Tournament top seed, Dinuka Karunaratne started his journey to the final with three straight set victories over Chaniru Mirando, Hasitha Chanaka and Viren Wettasinghe. He overcame a tough three-setter against Buwaneka Goonethilleka in the semifinal, 21/07, 13/21, 21/18, to book his spot in the final.

Joining him in the final was Sasindu Karunathilaka, who started his run from the bottom half as the 2nd seed. Sasindu’s quarter -final pairing was against Sachin Dias, one half of the famous Sachin-Buwaneka doubles duo. Sachin made Sasindu sweat in a 6/21, 21/14, 21/14 debacle, but Karunathilaka prevailed to proceed to the final round.

The youngest of the Karunaratne clan, Diluka Karunaratne stood in Sasindu’s way to the finals, posing a real threat in the semis. However, Niluka could only muster up a 23/21 win in the second set and sent Sasindu to face his brother, Dinuka in the grand finale.

In a cracker of a final, Dinuka Karunaratne overcame Karunathilaka in straight sets, 21/11 and 21/15 to win the Men’s National Badminton title for the second consecutive year. This is his third National victory overall, the first being at the 2010 Badminton Championship.

His older brother and two-time Olympian, Niluka Karunaratne will be delighted that his sibling has managed to keep the National Trophy, which he had won for 15 years, in the family. This will be the 18th straight year the Kaunaratne’s have dominated the Sri Lankan Badminton arena, proving that they are the family to be reckoned with.

Speaking to ThePapare.com, National champ Dinuka had this to say,

“I take all my games match by match and for me, it doesn’t matter whether it’s a first round match or a final, I give it my all. I could have done better than the way I played today, but there’s always pressure in a defending champion to retain the title, and I’m happy I was able to do that.

The National title has been with us since the year 2000, when my brother Niluka won it first when he was just 15. I am glad to bring it home for the 18th year and will make sure it stays here for a long time to come!”

Over in the Women’s Category, Thilini Hendahewa went a hunting for her 6th consecutive National title by defeating fellow team mate Kavidi Sirimannage. Thilini was is also a representative of the Sri Lanka Badminton team at the recently held Asian Games 2018.

Having received a bye in the first round, Thilini made easy work of her opponents on her way to the final. She defeated Hasini Ambalangodage in the pre-quarterfinals, Nadeesha Gayanthi in the quarters and Hasara Wijeratna in the semi-finals – all in comfortable straight sets.

In the big final, Sirimannage fought well to take the first set narrowly, 22 points to 20. The defending champion dug deep to bounce back stronger in the second and the third, winning 21/09 and 22/17 respectively to grab her 6th National title.

Photos of Day 3 of the Badminton Nationals 2018

However, the two girls later paired up in the Women’s Doubles event and went on to secure Gold with ease. They defeated Achini Ratnasiri and Upuli Weerasinghe in the final in a thrilling three-set battle with a score line of 16/21, 21/13, 21/15.

The two Doubles champions paired off with the two Women’s Singles finalists in the Mixed Doubles category. Coincidently, Sachin Dias and Thilini Hendahewa reached the final through the top half to face off against Buwaneka Goonethillake and Kavidi Sirimannage who made it to the top from the bottom half.

In an epic final dual, it was Goonethilleka and Sirimannage who prevailed with a score of 22/20 and 21/16 to be crowned the 2018 Mixed Doubles Champions.