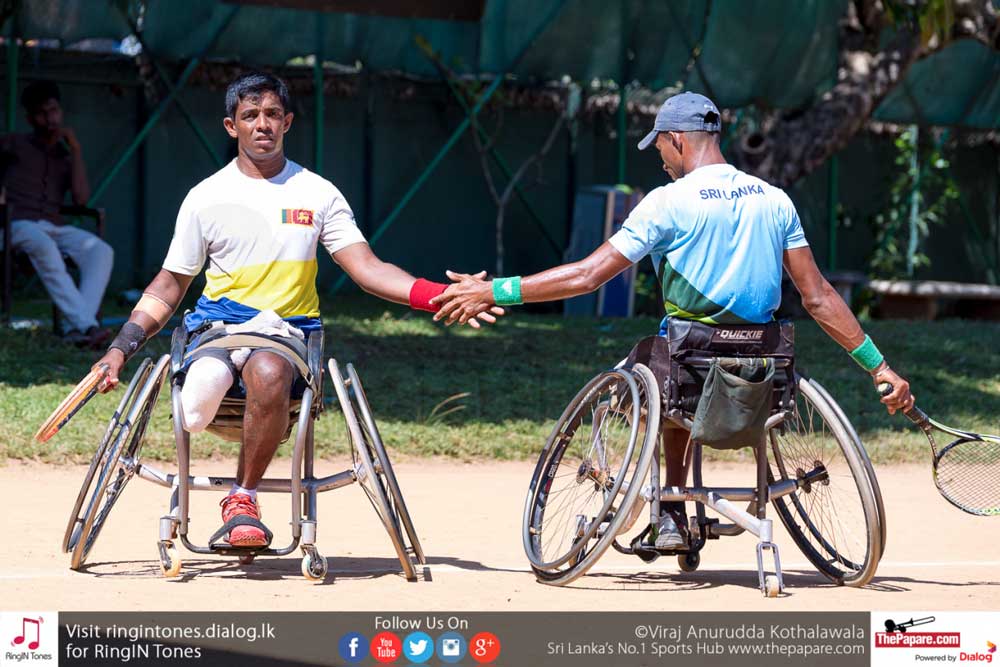 A team of 3 national wheelchair tennis players took flight to compete in the Indonesia 2018 Asian Para Games, with hopes of increasing their already impressive medal collection. The Games kicked off on the 7th October in Jakarta, Indonesia and will continue till the 16th October, with competition across 18 different sporting disciplines.

Akalanka Peiris of Sri Lanka fell short of qualifying for the final.

Gamini Dissanayake, Suresh Ranjan and Lasantha Ranaweera along with their National Wheelchair Head Coach Mr. Jagath Welikala represented Sri Lanka at the Games this year in both the Singles and Doubles events.

Taking the courts at Klub Kelapa Gading first, Suresh Dharmasena was squared off against Sridaeng Sunthon of Thailand in his Round of 64 match. Dharmasena was quick to attain Sri Lanka’s first win at the 2018 Asian Para Games with a straight set victory of 6/4, 6/0.

Shortly after, Lasantha Ranaweera made easy work of local Puji Sumartono 6/2, 6/1 boosting the Lankan bench at the start of play. Unfortunately, these were the only wins for Team Sri Lanka as it all went south in the latter half of the day.

Gamini Dissanayake went down to Malaysia’s Borhan Abbu Samah after a tremendous fight, 6/3, 6/4 facing his exit in the tournament. The most anticipated match of them all was a Korea – Sri Lanka tie between Suresh Dharmasena and Im Howon in the Round of 32.

Dharmasena got off to a good start, winning the first set with a clean break of serve 6 games to 4. Im Howon was quick to level things up, mirroring Dharmasena’s first set, taking the second set under him 6/4. Call it experience, Howon was a different entity in the third, not letting Dharmasena find his footing throughout the set. Howon closed out the match 6/1, ending Dharmasena’s stint in the Singles category.

Dharmasena’s doubles accomplice, Lasantha Ranaweera was up next for his Round of 32 match against Suthi Khlongrua of Thailand. Suthi slapped Ranaweera with a 6/1, 6/3 loss and exit ticket in the Singles draw of the 2018 Asian Para Games.

But all hope is not lost as their more dominant event, the Men’s Doubles, will kick start its first-round match this evening. With 16 medals between Ranaweera and Dharmasena in their recent visit to Malayasia, the duo would definite hope for a top three finish.

They will take on crowd favourites, Agus Fitriadi and Puji Sumartono of Indonesia this evening.

Stay logged on to ThePapare.com for news and updates on their journey at the Indonesia 2018 Asian Para Games.