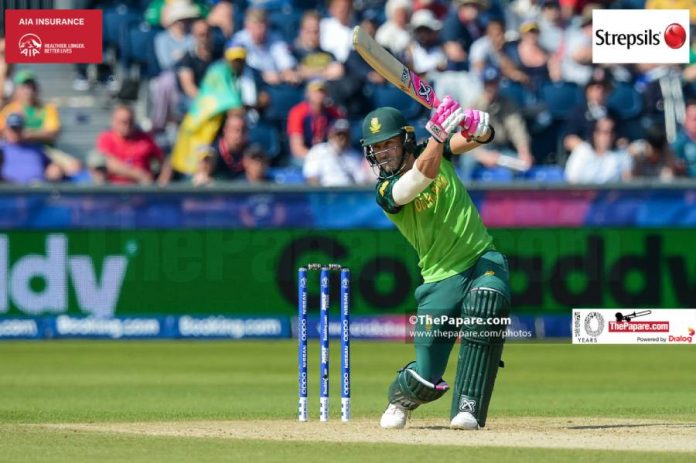 In a crucial fixture against South Africa which could potentially decide their fate in the tournament, Sri Lanka failed spectacularly at Riverside Ground, Chester-le-Street in the 35th group stage match of ICC Cricket World Cup 2019, losing by 9 wickets.

After another not-so-pretty middle order struggle, Sri Lanka could only muster 203 runs in 49.3 overs as South Africa skipper Faf du Plessis won the toss and decided to field first. It proved to be a good toss to win, as South Africa dismissed Sri Lanka cheaply and chased down the total with 9 wickets to spare.

Sri Lanka had made one forced change to their team which recorded a thrilling win versus pre-tournament favorites and hosts England at Headingley as Nuwan Pradeep was ruled unavailable due to fever. Suranga Lakmal was added to the playing XI to fill his void. After losing their previous match against Pakistan by 49 runs, South Africa made two changes as JP Duminy and Dwaine Pretorius came into the team instead of David Miller and Lungi Ngidi.

The Sri Lanka skipper was caught by surprise by the first ball of the innings as he misjudged the length of Kagiso Rabada’s delivery and chipped it to his counterpart at third slip.

He became the sixth batsmen in World Cup history to make a golden duck in the first ball of a match. Martin Guptill too was dismissed earlier in this tournament for a golden duck.

Rebuilding but not converting

The 21-year-old Avishka Fernando who announced himself in style in the previous game, joined Kusal Perera and from the get-go, the pair showed their intentions by finding the boundary often. Avishka Fernando was the real highlight, overshadowing his senior partner with pick-up shots to mid-wicket and picture perfect drives down the ground.

Sri Lanka raced to 67 in 10 overs, continuing their prolific first powerplay form in this tournament.

Unfortunately, Fernando was again dismissed playing an unnecessary shot after settling in and Perera soon followed him to the dressing room.

After the initial dismissals, Sri Lanka couldn’t accelerate in mid part of the innings, failing to rotate the strike and building undue pressure. There were large pockets in the Ground at Durham but the batsmen from no. 4 to 7 couldn’t pass the 30-run mark while failing to maintain a healthy strike rate.

At one stage Jeevan Mendis was on 5 off 38 balls, looking clueless while Dhananjaya Silva tried to accelerate but got out playing an ugly reverse sweep.

Thisara Perera and Isuru Udana tried to revive the innings but just like their predecessors, failed to do so. Out of form Thisara Perera couldn’t do much too as his innings ended on 21. Sri Lanka, just like their previous efforts, stuck to the same batting template and just crawled over 200, setting a target of 204 without batting out their 50 over quota.

For the Proteas, the inclusion of Dwaine Pretorius proved to be a masterstroke as he was responsible for 3 Sri Lanka top order wickets. Chris Morris and Rabada came to the party too, picking up 5 wickets between them.

Old Warrior at it again

The South African opening partnership could only flourish for 4.5 overs as Quinton de Kock’s stumps were rattled by a trademark yorker from that man, Lasith Malinga.  De Kock was on 15 and finding the middle of the bat when he was cleaned up by the veteran.

From then on, the experienced campaigners, Hashim Amla and skipper Faf du Plessis shook off the early butterflies as the pair went on to construct a 175-run partnership nullifying the Malinga threat while attacking the other bowlers.

The Sri Lankan bowling attack was exposed as they looked toothless in the face of two well set batsmen, failing to create any chances. But less pressure on the scoreboard certainly helped the South African batsmen.

Amla and Du Plessis scored 80* and 96* respectively, carrying South Africa to the target in 37.2 overs. Sri Lanka have now lost 4 out of 6 matches against South Africa in World Cups.

Sri Lanka are still not out of contention for a semifinal spot, but there must be lots of results that should go their way for them to qualify.

Sri Lanka’s next match will be against West Indies on 1st of July at the same venue.