Tharjini Sivalingam shot 77 goals, renewing her own record for most number of goals in a match at this edition of the World Cup.

The game started off with the lead changing hand briefly, but soon Sri Lanka took control as they had in their Group E game against Singapore, steadily building a formidable lead. As expected, it was Tharjini Sivalingam who did most of the damage for the Lankans as they took the 1st quarter 23-15.

More attacking Netball continued from Sri Lanka as they put their feet on the accelerator in the 2nd quarter with play flowing smoothly. Singapore had no answer for the lobs to Sivalingam as Sri Lanka’s lead grew to 15 by the end of the 1st half.

Hasitha Mendis, playing at Goal Attack throughout the tournament, had her best game, with her feeding to Sivalingam being spot on. She registered 44 feeds, an excellent number, considering that she hardly had to take a shot due to her own accurate passing to Sivalingam.

Sri Lanka had another quarter, 22-12, owing largely to the defensive efforts from the team, as they continued to turn over the ball. Skipper Chathurangi Jayasooriya was another one who shone, as she hardly let anything past her to the Singaporean shooter.

Needing just 11 goals to surpass her own record of 76 goals, the most in any Netball World Cup 2019 game by a single shooter, Sivalingam seemed to relax in the final quarter.

Singapore on the other hand, finally seemed to be getting some momentum as Captain Charmaine Soh kept hitting her long-range shots with ease. The Singaporeans ended up winning the quarter 17-13, but Sri Lanka still registered a 20+ lead at the end of the game to claim 15th spot.

Sri Lanka or should I say Tharjini Sivalingam, did not shoot as well as they would have liked, making just 77 of their 85 shots, but good defensive work and intelligent play in the centre court meant that they were allowed that luxury of missing a few shots.

Until midway through the 3rd quarter, Singapore’s Goal Attack Charmaine Soh carried through a 100% shooting record, making shot after shot from long range to keep her team within striking distance of Sri Lanka. 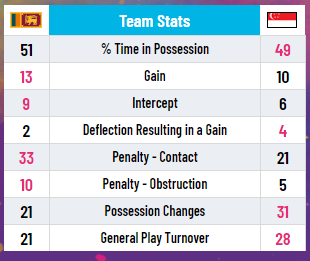 Soh, playing her 3rd World Cup was a standout for Singapore, as was Gayanjali Amarawansa for Sri Lanka – the understated Centre in Team Sri Lanka.

Despite doing one better than their performance at the 2015 World Cup, Sri Lanka will be disappointed at not being able to move further up the table. Coach Thilaka Jinadasa echoed this thought post-match, saying that although she is happy about staying the best team in Asia, she felt that Sri Lanka could have at least snuck up to 13th or 14th.