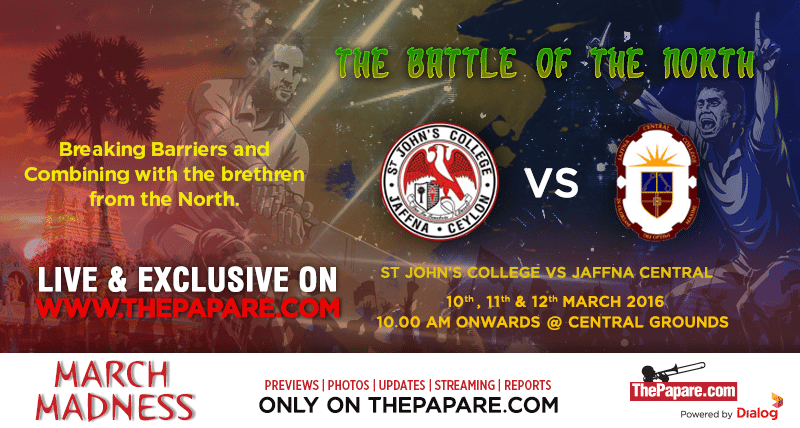 Jaffna Central College and St John’s College engage in the Battle of the North, an age-old cricket encounter played between two prestigious schools in Jaffna.

For more than a century these two schools in the Northern peninsula of Sri Lanka have taken on each other in a big match encounter. This match is considered as the third oldest Big Match in Sri Lanka after the Royal – Thomian in Colombo and the match between Matara St.Thomas – St.Servatius.

The first match of the”Battle of the North” took place as far back as 1904, making this year’s encounter the 110th. Akin to the Royal-Thomian encounter, this match is also played over 3 days.

Watch it Live – Battle of the North

St. John’s College leads the tally with 39 wins while their opponents have won 27 matches and 29 matches ended in drawn games.

Last year the victors were St John’s College who made a monumental 300/7 declared and got the Jaffna Central lads all out for 164.  St John’s then declared their second innings at 136/7 and yet again got the better of their rivals, bowling Jaffna Central out for 188 and winning by 84 runs.

Breaking barriers in the truest sense www.thepapare.com Sri Lanka No 1 sports hub will be streaming the match live globally enabling old boys around the world to follow the game.