Akila Dananjaya ran through the Bangladesh innings, bagging 5-24, restricting the hosts to just 123 in the second innings as Sri Lanka record a 215 run victory in the second test on day 3 in Dhaka, winning the Rocket test series 1-0.


Akila Dananjaya (5/24), Rangana Herath (4/49) and Dilruwan Perera (1/32) were too hot to handle for the home team batting line up, as the Sri Lankan spinners spun a web around them, as the visitors marched to an enormous 215 run win.

After lunch on day 3, Bangladesh lost 8 wickets for just 66 runs as no batsman managed to match up to the Sri Lankan spinners.

Only four Bangladesh batsmen (Haque 33, Rahim 25, Kayes 17, Das 12) managed to get into double figures as the rest failed in sorry fashion.

On a turning track at Dhaka, earlier on in the day, Sri Lanka was restricted to 226 in the second innings as man of the match and Man of the series, Roshen Silva was left stranded on an unbeaten 70 as he ran out of partners.

Sri Lanka began the day with two wickets in hand and a lead of 312 as Roshen Silva strolled out to bat along side Suranga Lakmal.

The two batsmen managed to negotiate ten overs at the beginning of play, looking relatively comfortable out in the middle.

Taijul Islam was brought into the attack after Muztafizur and Meihdi Hasan failed to make inroads as they conceded 26 runs in 11 overs.

Taijul clean bowled Suranga Lakmal for 21 off 41 balls as he missed a delivery that kept low as he looked to play an expansive sweep.

The very next ball, last man Rangana Herath, was caught leg before wicket in surprising fashion, however, Sri Lanka did not have reviews remaining as the innings came to an end at 226, leaving Bangladesh with a target of 339.

Tamim Iqbal walked out with Imrul Kayes as the hosts had a mountain to climb if they were to win the second test.

Suranga Lakmal’s first over went for 3 runs as Dilruwna Perera was handed the new ball from the opposite end. The off spinner did not disappoint, trapping Tamim leg before wicket with the straight delivery. The left hander reviewed to no avail as the hosts were reduced to 3 for the loss of 1 wicket.

Kayes was the next to follow fellow opener Tamim to the shed for 17 off 22 as the left hander was Rangana Herath’s first wicket of the second innings as Mominul and former skipper Mushfiqur took Bangladesh to lunch as the score read 57 for 2.

“It was a really good series. The first Test was a nightmare for the bowlers and this one was a nightmare for batsmen. We executed all our plans and credit goes to the entire team. We felt that this pitch could assist spinners, but we were a bit surprised at the way it played. Credit to Roshen Silva, he had an outstanding series. Kusal Mendis and Dhananjaya de Silva batted well, our bowlers performed excellently, especially Akila Dananjaya – on his debut, the management also deserve some praise for all the backing.” Skipper Chandimal said at the post-match presentation.

This much needed series win will undoubtedly boost the visitors moral –bringing Bangladesh back to earth– as they head into the 2 match T20 series, that starts on the 15th of February in Dhaka followed by the next t20 on the 18th of February. 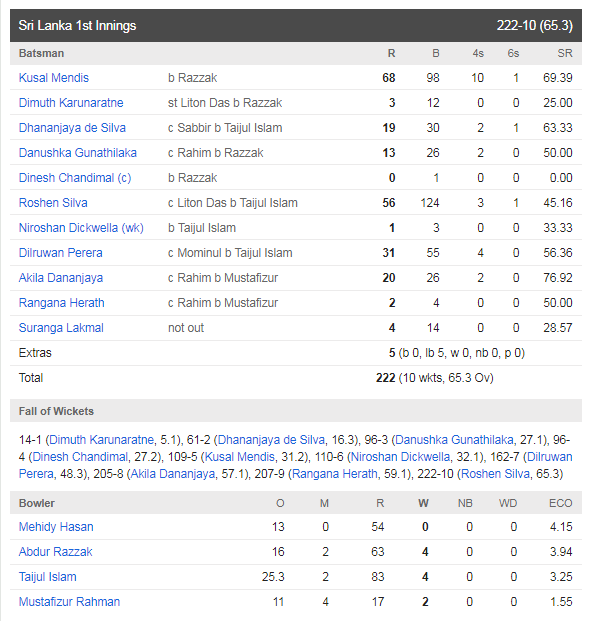 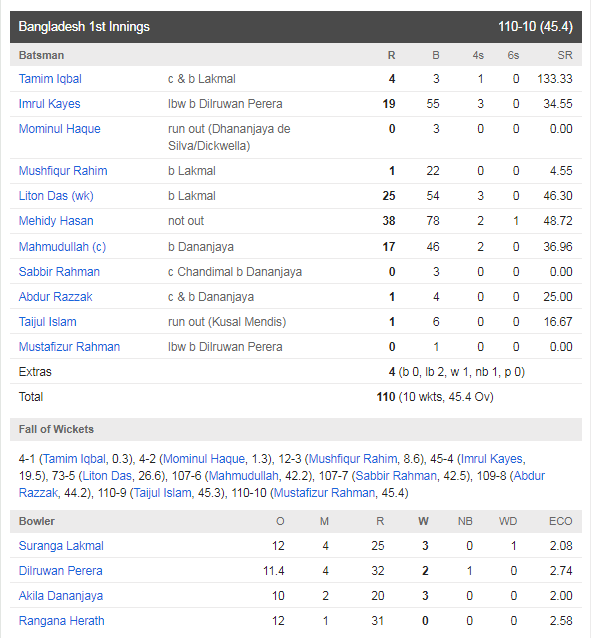 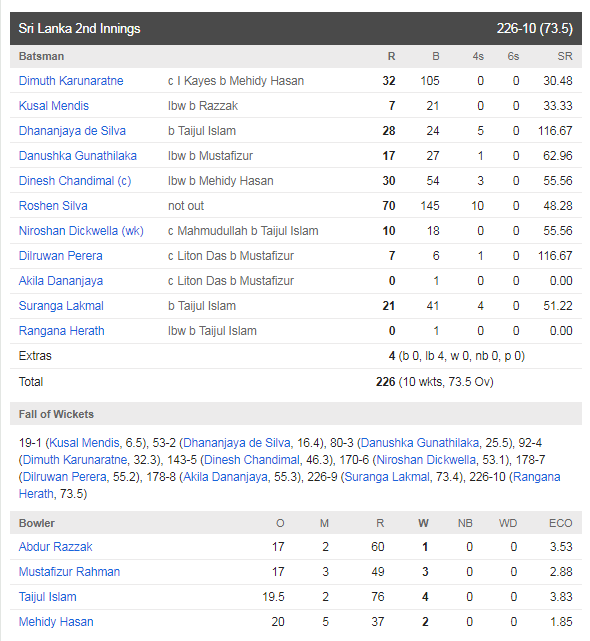 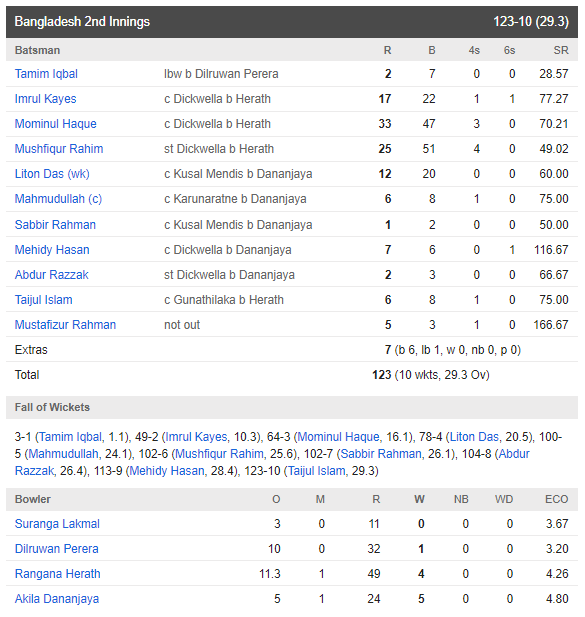