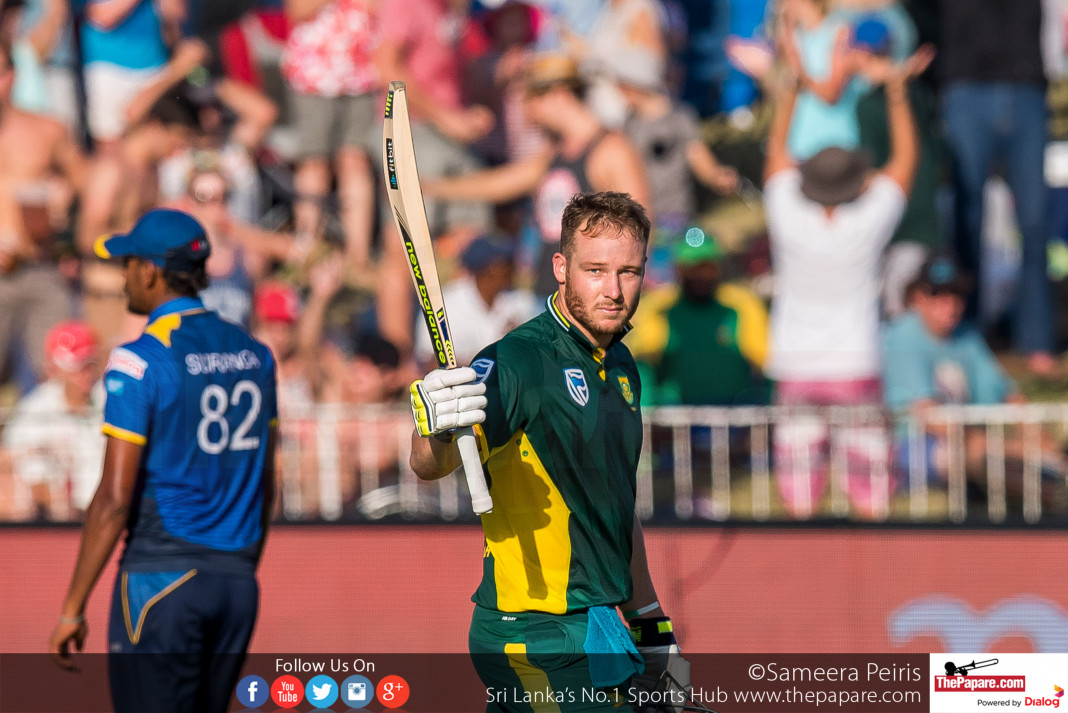 Faf du Plessis and David Miller scored centuries for South Africa as the hosts defeated a hapless Sri Lanka outfit by 121 runs in the second ODI at Kingsmead on Wednesday.

South Africa’s total always seemed likely to be too many for the tourists to chase and so it proved, as Sri Lanka were bowled out for 186, giving South Africa a 2-0 lead in the five-match series.

Upul Tharanga won the toss, yet bizarrely elected to field first, becoming the first Captain to do so in a day-night match at Kingsmead in 16 games. Sri Lanka had the upper hand when the South African top order had fallen to a combination of good deliveries and loose strokes.

Hashim Amla was trapped LBW by Suranga Lakmal in the 4th over while Quinton De Kock holed out to deep square leg off a Dhananjaya De Silva full toss. Captain AB de Villiers was caught behind off Lakshan Sandakan for 3 while Sachith Pathira dismissed JP Duminy cheaply to put the hosts in a spot of bother.

While the situation suited Du Plessis’ style of batting to anchor the innings, Miller was initially focused on ones and twos as they made steady progress against the Lankan slow-bowlers plethora. Du Plessis was dropped at slip on 63 off the bowling of Sandakan early in the stand, while Miller survived a tough chance to wicket-keeper Chandimal.

Du Plessis reached his 7th ODI hundred but failed to clear long-on and departed for 105. Miller went on to add 50 runs from his next 27 deliveries to finish unbeaten on 117 from 98 balls. With the left-hander in full flight in the final 10 overs, South Africa added 90 runs in that period.

Chasing 308 runs, Tharanga, opening the batting was dropped early on by Andile Phehlukwayo off Wayne Parnell, but the left-arm seamer was not to be denied. After Tharanga had put on 45 for the first wicket with Niroshan Dickwella, Parnell dismissed both in the space of four deliveries. First Du Plessis took a superb reverse one-handed catch above his head at cover and then de Villiers made excellent ground running back from mid-off to take the catch over his shoulder.

In-form Kusal Mendis began well, stroking three boundaries, but he hit Phehlukwayo to du Plessis at cover, and in the next over Dhananjaya de Silva was stumped off Imran Tahir. Dinesh Chandimal and Asela Gunaratne added 44 runs but just as they were looking promising a direct hit from JP Duminy saw Gunaratne run out for 18. Chandimal slashed hard and was caught behind off Chris Morris as the Islanders were restricted to 132 for 6 in the 26th over.

Chathuranga De Silva and Sachith Pathirana, both were drafted into the team for this game and they delayed the inevitable but Duminy dismissed both of them as Sri Lanka innings was wrapped up inside 38 overs.

“There were lots of twenties and thirties but nobody went on. We took four wickets but Faf and Miller had a very good partnership. If one of our batsmen had gone on and made a big hundred maybe we could have chased it down.” A dejected Tharanga said.

The result gave South Africa their 11th straight ODI win on home soil and the series now moves to Johannesburg for the 3rd ODI to be played on Sri Lanka’s Independence Day. 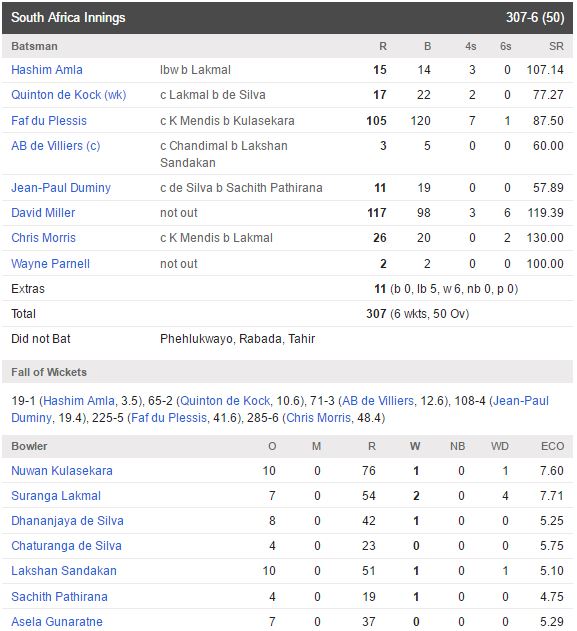 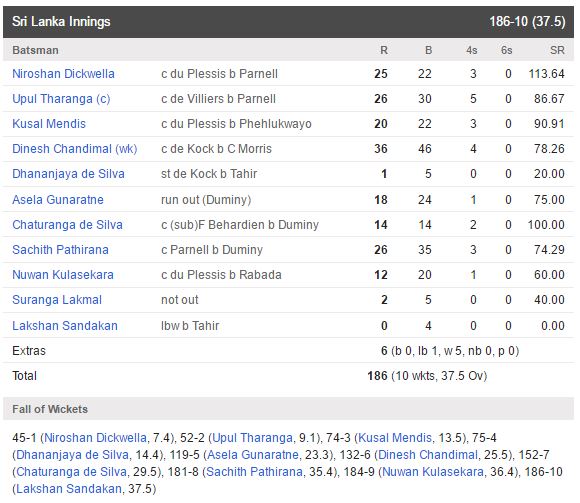