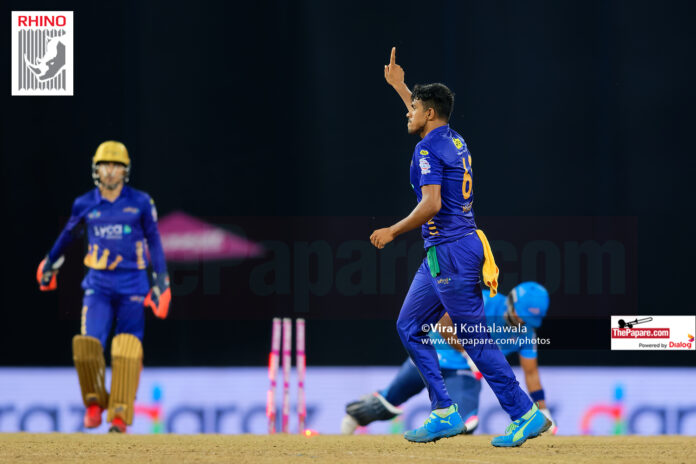 Maheesh Theekshana picked up a career best of 4/25 to help Jaffna Kings to a 93-run win over the Colombo Stars, after Thisara Perera’s 23-ball 57 took them to 207  in Match 9 of the Lanka Premier League.

The match was reduced to a 18-over a side affair due to rain ahead of the toss.

Chasing 208 (the highest chase in this year’s LPL) was never going to be an easy task against the Kings’ attack and Theekshana ensured that the Stars’ chances were further dimmed, picking up Kusal Perera off the 2nd delivery of the chase.

He then sent Tom Banton back into the dressing room and the Stars lost a further 3 wickets in the power play, reduced to 32/5 in 4.2 overs.

Dinesh Chandimal and Ashan Priyanjan tried to revive the innings, but it was Theekshana who ended those hopes too, returning in the 12th over to pick up both.

Wahab Riaz picked up 4/26 to close things out and give Jaffna Kings a massive win, taking them to the top of the LPL table with 6 points in 4 games.

Earlier, Perera was at his brutal best, smashing 5 sixes and 3 fours, thanks to which the Kings managed 70 runs off the last 4 overs. Dushmantha Chameera bore the brunt of Perera’s attack, going for 43 in his last 2 overs.

The Kings started well, despite losing Rahmanullah Gurbaz off the first ball of the match and Avishka Fernando not too long after, with Tom Kohler-Cadmore and Shoaib Malik taking on the Stars’ bowlers. The momentum of the innings was never allowed to wane by the Kings middle order, with Kohler-Cadmore (40), Malik (44), Ashen Bandara (42) and Perera (57*) all maintaining strike-rates above 140.

Seekkuge Prasanna was the pick of the bowlers for the Stars, picking up 3 wickets, but it was overall a forgettable performance by the home team in the field.