India registered their biggest T20I win in terms of margins as they crushed Sri Lanka by 93 runs in the first T20I match played at Barabati Stadium, Cuttack on Wednesday night.

Following the ODI series, the Sri Lankans will be hosted for a 3-match T20 series…

After being sent into bat on a flat deck, the hosts posted a reasonable 180 on the board and later, their wrist spinners – Yuzvendra Chahal, Kuldeep Yadav together with seamer Hardik Pandya wrecked the Lankan batting unit to their second lowest T20I score – 87 with 4 overs to spare.

Sri Lanka playing their 100th T20I match was very poor in executing their plans with both bat and ball. They showed poor body language chasing a tough target albeit having dew on the ground.

Earlier, KL Rahul, Indian opening batsman who came in place of rested Shikhar Dhawan hammered a cracking 61 off 48 balls, third 50+ score in T20I to set the pace for the home team.

Nuwan Pradeep picked up his maiden T20I wicket, edging Shreyas Iyer while Rahul was castled by a disguised slow ball by Thisara Perera.

MS Dhoni and Manish Pandey collected 68 runs from the last 5 overs as they took India to 180 for 3 after coming together when the score was 112 in the 15th over.

Both Dhoni and Pandey struck at a rate of 177 as the Lankan fragilities of bowling in the end were exposed once again. Vishwa Fernando and Dushmantha Chameera who came into the side purely as bowlers delivered only five overs amongst them.

Chasing 181 runs to win, Sri Lanka lost Niroshan Dickwella in only the second over off left-arm seamer Jaydev Unadkat. In-form Upul Tharanga looked in brilliant touch scoring 23 off 16 balls with 2 sixes but the introduction of Chahal to the attack brought an end to the Lankan hopes.

He dismissed Tharanga down the leg-side with MS Dhoni taking a neat catch while Angelo Mathews gave a simple return catch. Asela Gunaratne was also bamboozled by Chahal’s leg-spin down the leg-side.

Kusal Janith Perera, returning to the side made a slow 28-ball 19 at number three before skiing one off chinaman Kuldeep Yadav. Dasun Shanaka too holed out in the deep off Yadav while skipper Perera came down the track aimlessly and got stumped off Chahal who ended with figures of 4 for 23.

Pandya wrapped up the tail as the Sri Lankan innings lasted only 16 overs, another sorry performance by the islanders.

“Chasing 160-170 here (would have been easier). We can chase 180 if we get a good start. The middle-order had to continue the good performance. Really disappointed with our batting line-up.” Perera said at the post-match presentation.

India lead the three-match series, 1-0 and the next match will be on Friday, 22nd December in Indore.

Man of the Match – Yuzvendra Chahal 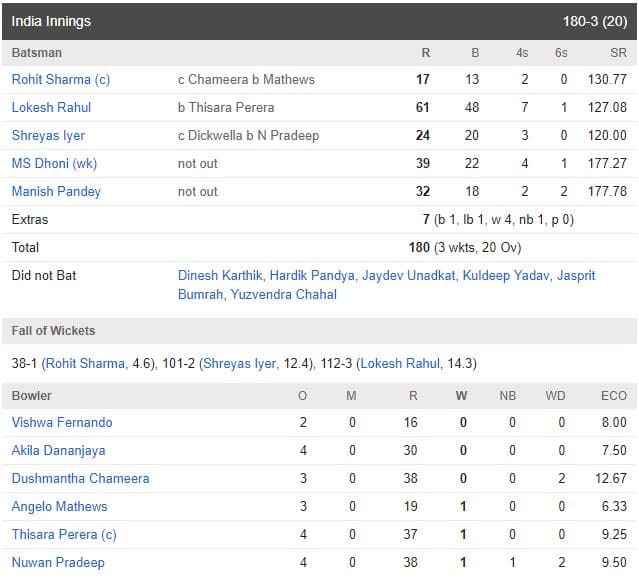 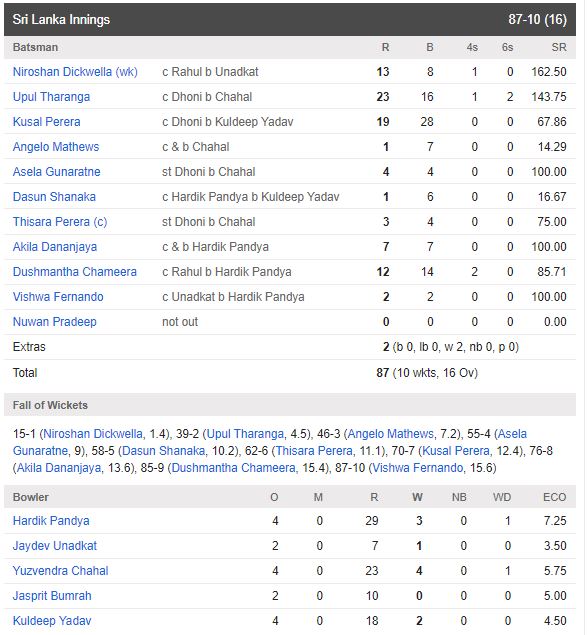