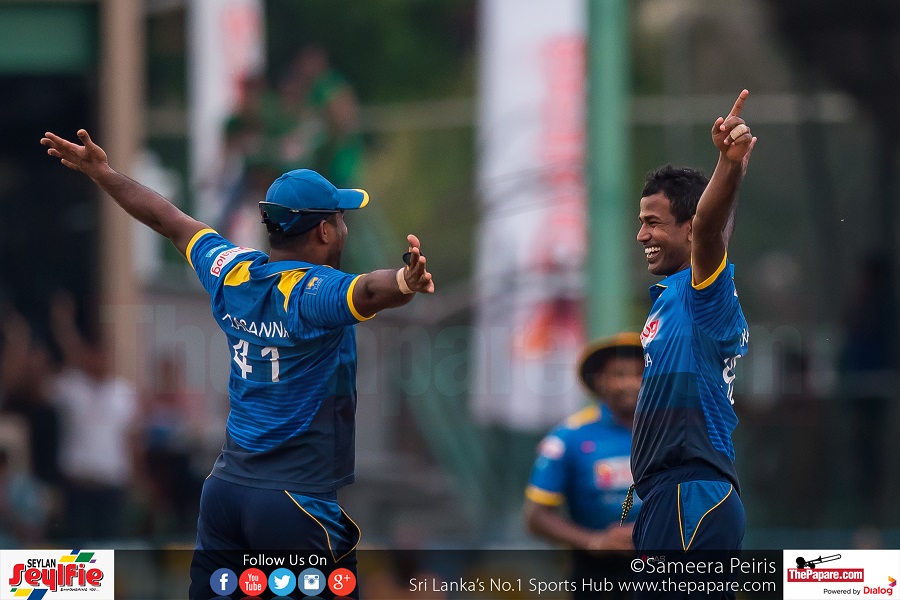 Sri Lanka put up an excellent performance in the field to win the 3rd and final ODI against Bangladesh and level the series 1-1 at the SSC earlier today. After setting Bangladesh a target of 281, the hosts’ bowlers put on an outstanding performance to restrict the Bangladeshis to 210 and win by 70 runs.

Sri Lanka looked to be a completely different side to the one that was completely outplayed in the 1st ODI in Dambulla exactly a week ago, particularly in the field where the inner ring, led by Dhanushka Gunathilake, saved perhaps close to 20-30 runs.

The game began in blistering pace with Upul Tharanga and Gunathilake putting on 79 in the 1st powerplay after being put into bat by the Bangladeshi skipper Mashrafe Mortaza. Tharanga was the more aggressive of the pair and once again looked to be in excellent form, making a run-a-ball 35 that featured some crisp cuts and drives.

Despite the brisk start, the Bangladeshis got back into their element once the 1st powerplay ended as Mehedi Hassan struck 1st to dismiss Gunathilake in the 11th over. Tharanga was done in by some clever bowling by Taskin Ahamed and from then on Sri Lanka had to labour for their runs. Nearly all the batsman got starts, but it was Kusal Mendis who once again anchored the innings, making 54 in 76 deliveries.

Dinesh Chandimal was dismissed in controversial manner as Sri Lanka’s issues with running between the wickets persisted. Chandimal had initially creased his bat while returning for a second run but subsequently lifted both his bat and front foot at which time Mushfiqur Rahim whipped off the bails. With no part of his body in contact with the floor behind the crease, he was given out by Umpire S Ravi.

Sri Lanka would have felt that they were at least 20-30 runs short of where they should have been at the end of their innings after the start they got. However they would not have gotten there if not for a mature innings by Thisara Perera, who made 52 off 40 deliveries, putting on 45 runs off 27 alongside DilruwanPerera to take Sri Lanka to 280. This was incidentally the 1sttime Thisara had made two half centuries in one series.

Nuwan Kulasekara and Suranga Lakmal then broke the back of the Bangladeshi chase, dismissing Tamim Iqbal, Sabbir Rahmanand Rahim within the first 4 overs. Tamim was disappointed after being given out as he felt Kulasekara had lost control of the ball before completing the return catch, however, replays showed the bowler to have only dropped the ball while in the act of throwing it up in celebration.

A brief resurgence by Shaqib Al-Hasan and Soumya Sarkar gave Bangladesh some hope but Dilruwan bowled an absolute gem of a delivery that drifted into the batsman and then spun away to have Sarkar stumped.

From that point, wickets came regularly and although MehediHasan made a resilient 51, it was never going to be enough for the visitors as they were bowled out for 210. Kulasekara, Lakmal and Dilruwan picked up 8 of the 10 wickets to fall while Seekkuge Prasanna accounted for the other 2.

The teams will next play 2 T20Is on the 4th and 6th April respectively.