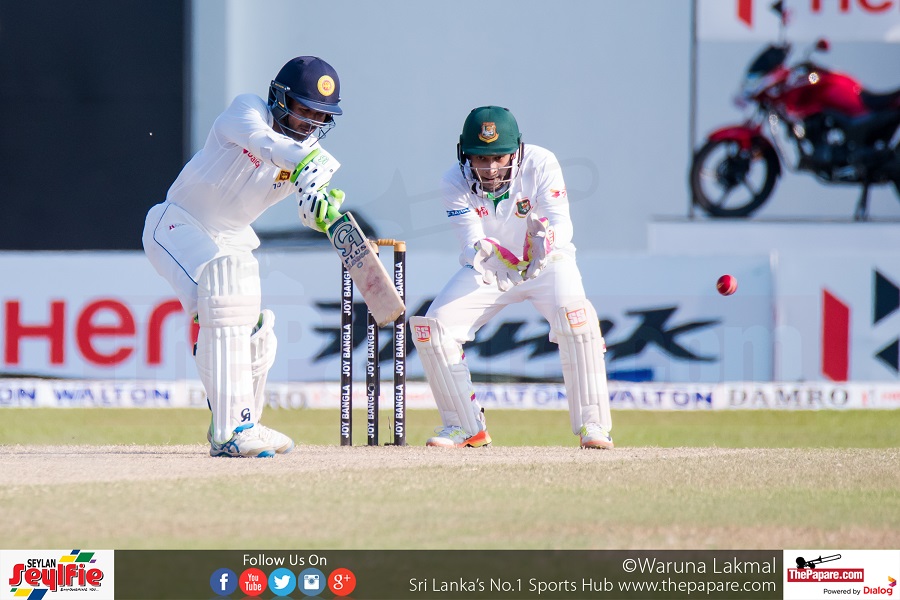 Upul Tharanga and Dimuth Karunaratne managed to make it through the last hour of the 3rd day’s play unscathed as the pair put on 54 in 13 overs to reduce Bangladesh’s lead to 75 at stumps in the 2nd Test at the P Sara Oval.

It was Bangladesh’s day through and through, except for that last hour of play, as some sensible batting helped the visitors build a substantial 1st innings lead of 129.

Shakib Al-Hasan was dropped late last afternoon by Tharanga and the miss came back to haunt the hosts as Shakib made the most of the opportunity, crafting an invaluable century; his 5th overall and 2nd against Sri Lanka. He was involved in 2 big and possibly game changing partnerships; 92 alongside Captain Mushfiqur Rahim and a further 131 alongside debutant Mosaddek Hossain, who looked impressive in his 155 ball knock which yielded 75 runs.

Overnight batsmen Rahim and Shakib put on a comfortable 92 run partnership, ensuring that Sri Lanka did not get any openings in the morning session. Sri Lankan skipper Rangana Herath tried it all, starting with pace and spin, switching ends, etc but the breakthrough just did not come for the hosts until the new ball was taken.

Suraga Lakmal, who had been impressive last evening as well, finally broke through what proved to be a vital partnership when he bowled Rahim for a well-made 52.  Sri Lanka’s fielding once again left much to be desired as a few misfields were followed by a Shakib top edge sailing over Lakshan Sandakan, who was a few meters in front of the ropes; had he been on the line, the catch would have gone to hand. Earlier in the day Rahim had survived a strong shout for LBW off the bowling of Herath; the hosts referred the decision but the point of impact was to stay with the on-field umpire’s call.

Hossain looked to attack the spinners right from the word go, with his innings of 75 including 7 fours and two sixes. Once Shakib was dismissed, he put on a further 33 runs alongside Mehedi Hasan to further swell Bangladesh’s lead.

Ranagana Herath produced some magic to break the partnership just as it was beginning to look ominous, drifting the ball in and taking it away to hit Hasan on his back pad and claim an LBW. Mustafizur Rahman fell for a golden duck as Herath struck him plumb in front to claim his 1000th First Class wicket.  The left armer then had Hossain stumped to finish with figures of 4/82 and end Sri Lanka’s long stay on the field.

The Lankan openers had some luck with Karunaratne being dropped by Rahim behind the stumps and Tharanga nearly chopping on a Rahman delivery but scored at a brisk pace to shrink the visitor’s lead to 75 by stumps. 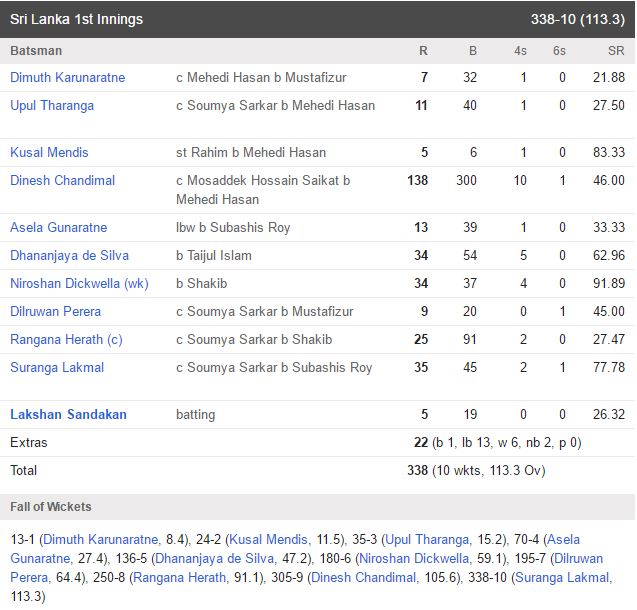 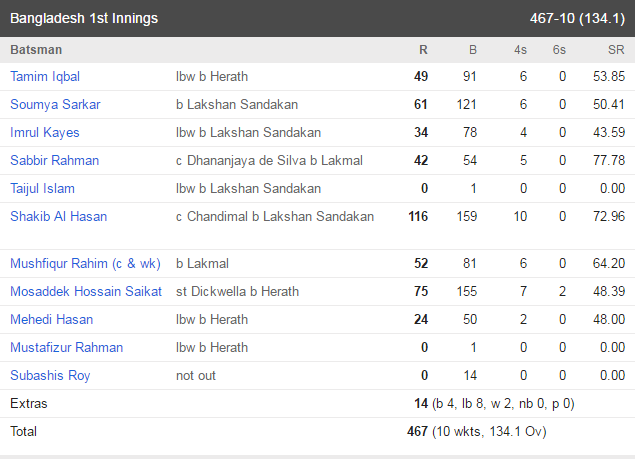