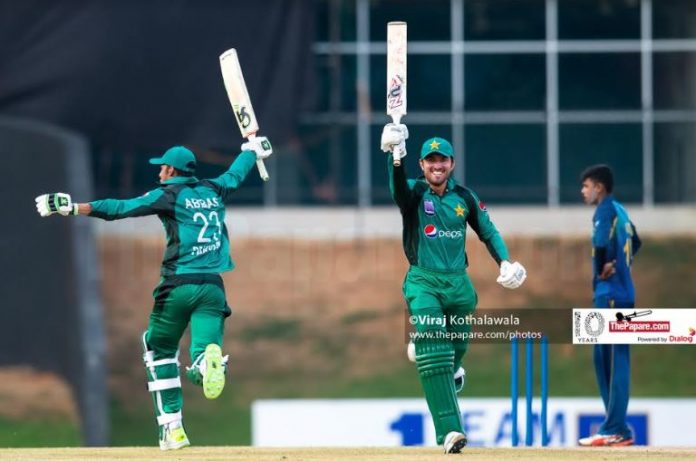 A counter attacking knock of 87 by skipper Rohail Nazir made sure Pakistan U19 beat Sri Lanka by just 3 wickets in the penultimate delivery of the 2nd Youth ODI which was played at the Mahinda Rajapaksha International Cricket Stadium in Hambantota today (28).

Sri Lanka U19 captain won the toss and decided to bat first again after the win in the first Youth ODI where Pakistan batting line-up crumbled spectacularly after being 3 for 179 to 208 all-out, chasing 234.

Unfortunately, the top runs scorers in the previous game, Navod Paranavithana, Mohommed Shamaz and vice-captain Kamil Mishara had to depart early today, without getting into double figures. The horror start didn’t end there for Sri Lanka as captain Perera, Sonal Dinusha and Dilum Sudeera were too outdone by young Pakistani pacers as Sri Lanka was stuttering at 6/69 in the 18th over.

From there on, an exciting rebuilding work was done by two genuine all-rounders, Avishka Tharindu from St. Anthony’s College, Wattala and Chamindu Wijesinghe from Nalanda College. The pair batted with authority and sense of calm, putting up a vital partnership of 74 runs before Wijesinghe was caught at fine leg by Akthar Shah off Junaid Khan’s bowling.

Being the high scorer of the innings, Tharindu crafted a well deserving half century to put the pendulum back at Sri Lanka including five muscled boundaries at the huge MRICS ground. After a 78-ball vigil, Tharindu miscalculated the field and pulled one off Mohammad Taha to square leg, only to find the fielder when Sri Lanka was 153.

There was still a lot to be done and as the situation demanded, Rohan Sanjaya and Ashen Daniel combined in the middle to keep the fielders busy, manufacturing a 67-runs partnership for the 9th wicket in 10.3 overs, showing the batting depth of this young batting unit.

Sanjaya and Daniel pulled back Sri Lanka to the safety, ending the innings at 220-8 in the full quota of 50 overs, producing valuable knock of 45 and 20 respectively.

Pakistan openers couldn’t get to a great start as Saim Ayub was bowled for 7 runs by Dilshan Madushanka. Last match’s only half centurion for Pakistan, Haider Ali again made a valuable 56 runs with 6 boundaries. Ali and skipper Rohail Nazir made things look easy at the middle, rotating the strike very well while finding the odd boundary.

Nazir handled the spin challenge well, getting to the pitch of the ball and attacking spinners so that home spinners had to adjust their length regularly. He almost took his team over the line before getting out, edging to the keeper when the score was 193.

The pick of the bowlers for Sri Lanka once again, was Dilum Sudeera who bowled his 10 overs just for 35 runs, picking up 2 wickets.

The series is now tied with 1-1 and the 3rd match will be held on 31st of May at the same venue.

Pakistan U19 won by 3 wickets