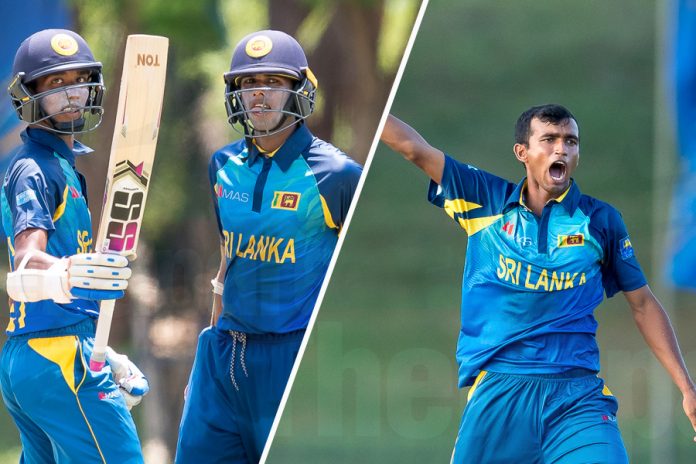 A stellar display of disciplined bowling and fielding followed by a good batting effort helped Sri Lanka U19 beat Pakistan U19 by 26 runs in the 1st Youth ODI today(26th May) at the Mahinda Rajapaksha International Cricket Stadium in Hambantota.

Experienced Sri Lanka U19 skipper, Nipun Dananjaya opted to bat first on a dry Hambantota surface in hot conditions after winning the toss. Opening the batting for the hosts, vice-captain Kamil Mishara and Navod Paranavithana laid a solid foundation for the Lankan innings as they saw through the two new balls cautiously.

Sri Lanka Cricket (SLC) announced two U19 squads for the upcoming five-match youth ODI series against Pakistan U19, which starts

The two left handers representing Royal College and Mahinda College respectively, went on to score half centuries before Paranavithana was caught at long-on for 54 in the 31st over. The opening stand was worth 122 runs and had set the ideal platform for the middle order to fire. However, the slow-paced partnership also was assisted by some sloppy fielding by the visitors as they dropped two catches. Compensating for the missed opportunities, the tourists fought themselves back into the match with the wicket of Mishara soon after his opening partner was dismissed.

Sri Lanka’s busy number 3, Mohammed Shamaz then together with captain Dananjaya added 40 runs in 5.4 overs to improve Sri Lanka’s scoring rate before Dananjaya was dismissed for a 19-ball 21. Mahanamian Sonal Dinusha then paired up with the Zahirian Shamaz and added 38 runs in 36 deliveries for the 4th wicket. The highlight of their busy partnership was their lightning-quick running between the wickets.

Sri Lanka really couldn’t capitalize on their brilliant start as they crumbled towards the end of the innings. Following Dinusha’s dismissal for 17 in the 46th over Shamaz too perished in the very next over for a well-made 42 off 47 deliveries. Eventually, the Sri Lankan innings ended on 234 for the loss of 9 wickets batting all 50 overs.

Pakistan U19 tour of Sri Lanka to go ahead

The run-chase began swiftly as the opening pair of Saim Ayub and Haider Ali went on to add 85 runs for the 1st wicket. Right-handed Ali was superb with his stroke play as he stroked the Sri Lankan bowlers to all parts of the ground. Sri Lanka’s lead pacer, Chamindu Wijesinghe was targeted in particular as he went for 30 in his 4 overs.

When Pakistan was in a commanding position at 85 for no loss after 18 overs, the game changing over for the home boys happened. Josephian offie, Ashain Daniel, bowling it first got rid of the left-handed Ayub for 31 runs as he miscued a well-looped delivery.

Ali was run-out in the same over courtesy Avishka Tharindu’s brilliance in the field. Tharindu who showed so much promise as a fielder at covers was outstanding throughout the match with his fielding. In fact the whole Sri Lankan unit was fabulous on the field.

The captain Rohail Nazir and vice-captain Mohammad Taha then rescued their team from the double blow with a 70-run partnership in 15.1 overs. The visitors were cruising towards the required target on 155/2 after 34 overs when Tharindu once again came in to the act with a stunning catch at short mid-wicket. Taha was the man to be dismissed for 36 off left-arm seamer Dilshan Madushanka of Wijayaba National School Hungama.

Rohail Nazir, who scored a century on his first-class debut this season, has been appointed as Pakistan U19 captain

Then onwards it was all about Sri Lankan spinners as they bundled out their opponents for 208 in the 48th over to record a 26-run win and go up 1-0 in the 5-match series. The Sri Lankans produced two more run-outs including that of captain Nazir for 47, showing the height of their fielding standards.

Out of the 6 wickets to fall since the dismissal of Nazir, 5 were taken by left-arm spinners Dilum Sudeera and Paranavithana. Paranavithana grabbed the last two wickets in the 48th over of the match while Sudeera destroyed the Pakistani lower middle order with his 3 wickets.

The two teams will now meet for the 2nd Youth ODI at the same venue on the 28th of May.