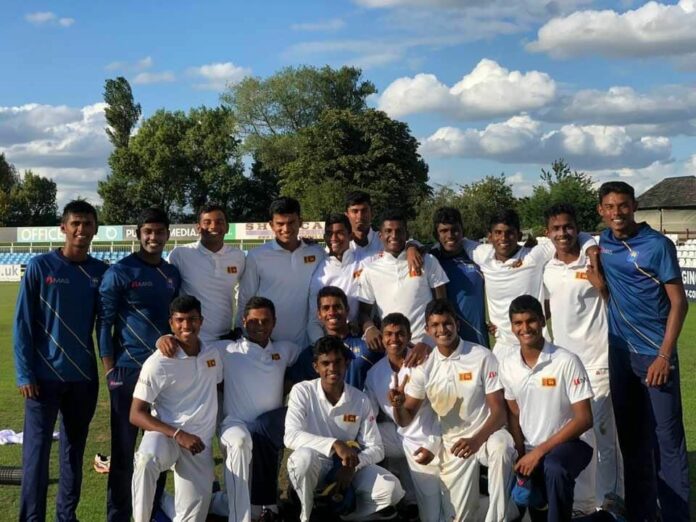 Sri Lanka resumed the final of the 2nd Youth Test in a strong position at 480/8 with a 99-run lead over the hosts with skipper Raveen de Silva (65*) and No. 10 batter Duvindu Ranatunga unbeaten at the crease.

The duo added another 41 runs for the 9th wicket in the morning session before De Silva was trapped in front after scoring a well-compiled 75 runs off 197 balls with 7 fours and a six. Ranatunga provided late impetus to Sri Lanka’s innings scoring 54 runs off 58 balls with 8 fours and 2 sixes as they posted a mammoth 542 runs for their first innings.

For England U19s, left-arm spinner Yousef Majd, who picked up 3 wickets for 104 runs, was the best on show with the ball.

Harry Singh and Ben McKinney opened the batting for England in their 2nd essay with the hosts trailing by 161 runs. The duo provided a good start putting on 79 runs for the opening wicket. McKinney and No. 3 batter Ross Whitfield put on another successful partnership of 79 runs.

When England were sailing along smoothly, Sri Lanka managed to make an excellent comeback thanks to their spinners who picked 4 quick wickets for 41 runs putting the hosts onto the back foot. After being 1 for 158, England went into the Tea break reeling at 5 for 189.

However, England showed excellent application and resistance with the bat in the post-tea session as their No. 4 batter James Rew and No. 7 batter Tom Lawes built an unbeaten 60-run partnership for the 6th wicket helping their side holding onto a draw. Leg spinner Raveen de Silva was the pick of the bowlers for Sri Lanka as he bagged 3 wickets for 83 runs.

With the 2nd Youth Test ending in a draw, Sri Lanka managed to win the 2-match series, 1-0 which is their 2nd consecutive Youth Test series win on England soil after they emerged victorious in their last visit to England in 2016 defeating the hosts, 1-0 in a 2-match series.