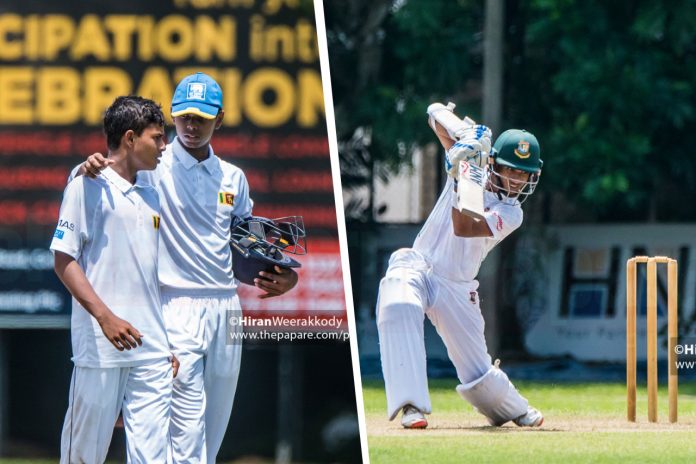 The Sri Lanka U19s were made to toil the entire day on the field as Bangladesh took complete control of the game with a healthy first innings lead of 137 by the end of day 2 of the 2nd and last Youth Test between the two teams at the Sheikh Abu Naser Stadium in Khulna.

Resuming their 1st innings from 71/2 in reply to the 184 made by the visitors, the overnight batting pair of Prantik Nawrose and Alvi Haque took Bangladesh almost past the Lankan 1st innings score. After batting through the first session unseparated, Nawrose was unfortunately caught behind 2 runs short of a well-deserved century when Bangladesh were trailing by just 1 run.

All-round Chamindu shines on poor opening day for SL U19

The 2nd and last Youth Test between Sri Lanka U19 and hosts Bangladesh U19 kick-started today at the….

Haque continued to maintain the Bangladeshi dominance over the tourists from then onwards as he was very well supported by Shahadat Hossain. The 81-run 4th wicket stand between Haque and Hossain made things worse for the Lions who were trying to recover after conceding a mammoth partnership of 135 runs for the 3rd wicket.

The dismissal of Haque for 72 runs by debutant pacie Amshi de Silva, however helped Sri Lanka to creep back with a few more quick wickets. From 264/3, the hosts lost 5 wickets for just 46 runs within a space of 15 overs or so. The rejuvenated Lankan bowlers hunted as a pack as Captain Nipun Dananjaya led the way, claiming 2 out of the 5 wickets which fell in that period of the game.

Bangladesh were still in the driving seat despite some late strikes as they finished the day on 321/8 with Meharab Hasan unbeaten on 15, holding the key for them.

In bowling for Sri Lanka, Dunith Wellalage’s efforts emerged to be brilliant as he did the bulk of the bowling. The 2 wickets during his marathon effort of 30 overs included the crucial wicket of Nawrose.

The Lions will now have to put up something special with the bat tomorrow if they are to finish this game on a high.