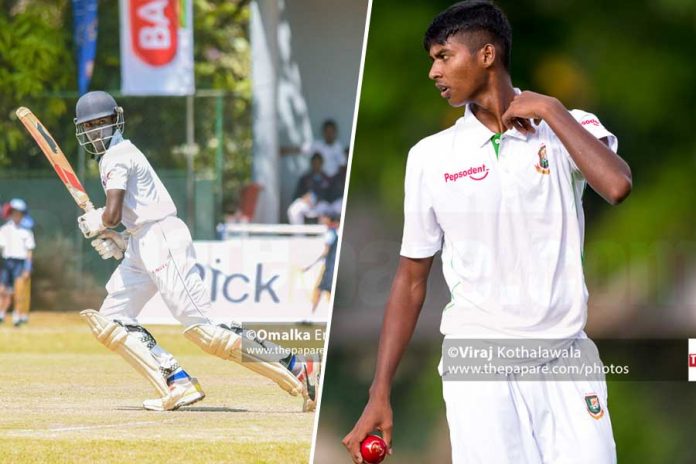 The 2nd and last Youth Test between Sri Lanka U19 and hosts Bangladesh U19 kick-started today at the Sheikh Abu Naser Stadium in Khulna. The home team ended day 1 in a strong position as they were on 71/2 after bundling out the visitors for 184.

The Sri Lanka U19s were put into bat first after the home Captain won the toss on day 1. The tourists made just 1 change to the batting order which scored 300+ in the 1st Youth Test in Barisal, replacing wicket-keeper Chihan Kalindu with Nalanda College skipper Avishka Perera. Along with Avishka, fellow Nalandian Raveen de Silva and Richmondite Amshi de Silva were also handed their maiden Youth Test caps. Trinity College skipper Ruvin Peiris was also included to the final playing XI as the bowling attack underwent a total of 3 changes from the 1st game in Barisal.

Sri Lanka faced an early loss of momentum when they lost 3 quick wickets after a modest opening stand of 46 between Chamindu Wickramasinghe and Thaveesha Abhishek. Half-centurion in the previous game, Sonal Dinusha was sent back for a duck to put Sri Lanka in deep trouble, as they were struggling on 58/3 with his dismissal.

Skipper Nipun Dananjaya together with Wickramasinghe rescued the Lankans from trouble at that point, adding 57 runs for the 4th wicket between them, before Shahin Alam, who had taken all 3 wickets to have fallen, completed his 5-wicket haul, dismissing both the set batsmen.

Sri Lanka were able to add just 69 more runs from that point onwards as they were bundled out for a modest 184. After Wickramasinghe fell for 73 as the 5th wicket, spin bowler Avishka Lakshan took on the responsibility and accumulated 47 valuable runs with little support from the other end. Even with a batting order which had 9 capable batsmen Sri Lanka disappointingly failed to go past 200. Alam completed the Lankan collapse with impressive figures of 7/62.

In reply Bangladesh got off to a good start, scoring 41 runs for no loss in the first 11 overs. It was once again the Antonian Wickramasinghe who stood up for Sri Lanka as he provided them the much needed breakthrough with his right-arm pace bowling as the first change bowler.

The all-rounder who dismissed Bangladeshi opener Sajid Hossain for 26 struck again in his next over to dismiss Pritom Kumar for 6. Opener Prantik Nawrose and Alvi Haque batted the remaining 10 overs cautiously to see through the day with no further damage done. The duo will resume tomorrow with Bangladesh on 71/2, trailing Sri Lanka by 113 runs.

Interestingly, Sri Lanka used 7 bowlers in their 23 overs with Dunith Wellalage bowling 7, the most, for just 7 runs. Opening pacie Ruvin Peiris finished the day on the expensive side with an economy of 5.5.

Video – Ryan Fernando’s half century in 141st Battle of the...

Video – Gavin Boteju’s half century in 141st Battle of the...