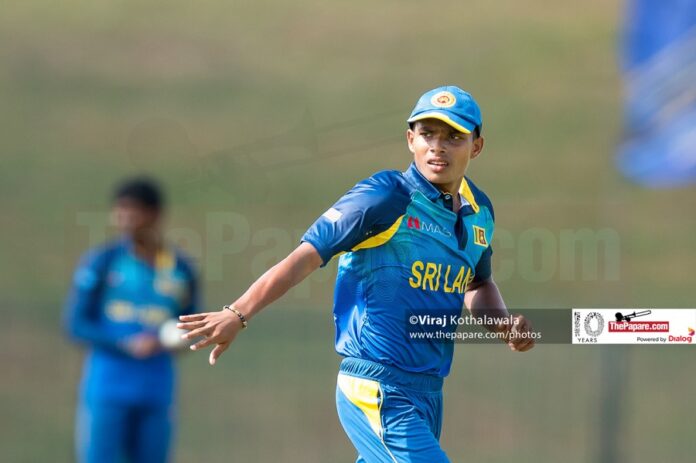 St. Joseph’s College all-rounder Dunith Wellalage is set to lead the Sri Lanka U19 team in the upcoming five-match Youth ODI series against Bangladesh which starts on the 15th of October in Dambulla.

Wellalage, a talented middle order batter and a left-arm spinner, is one of the few players in the squad to have represented Sri Lanka U19s prior to this series. Since making his U19 debut in 2018, Wellalage has played eight youth ODIs. He led St. Joseph’s College to the U19 Schools limited-overs title earlier this year and has played five first-class matches and four list ‘A’ games for Lankan CC.

Right-arm slinger Matheesha Pathirana is the only player from the squad to have played in the ICC U19 World Cup last year while fast-bowling all-rounder Chamindu Wickramasinghe, left-arm seamer Yasiru Rodrigo and leg-spinning all-rounder Raveen De Silva are the other three players, who have donned the national jersey before.

Read: Gunawardene and Halangoada to head Sri Lanka Under 19 Team

The team will enter a bio-secure environment in Dambulla today (7) along with the visiting Bangladesh team. All five youth ODIs will be played at the Rangiri Dambulla International Cricket Stadium. The matches will be played on the 15th, 18th, 20th, 23rd and 25th of October.

Bangladesh are the reigning U19 World Cup winners and they recently defeated Afghanistan U19 3-2 in a five-match series at home. This is Sri Lanka U19s first assignment since the U19 Youth World Cup in 2020.