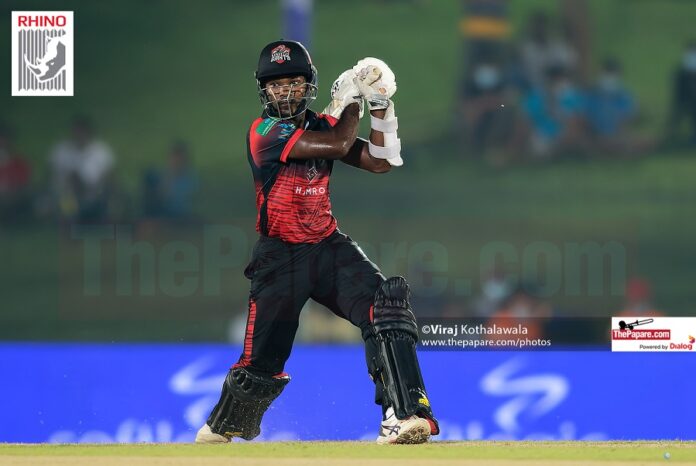 On the other hand, Dambulla Giants came up with three changes including their skipper Dasun Shanaka who injured himself in the last game, Tharindu Rathnayake and Marchant De Lange. Sandun Weerakkody, Nuwan Pradeep and Joshua Little make into the playing XI of Giants.

Tom Banton and Kusal Perera opened the innings for Stars but their stay at the crease didn’t last long as Perera mistimed a lofted shot as he was caught at mid-off of the bowling off Pradeep in the very second over for just 3 runs.

The other opener Banton ran himself out for the second consecutive time of the tournament after scoring just 13 runs as Stars managed to put only 28 for 2 in the powerplay stage.

Nissanka built two crucial partnerships of 38 & 28 with De Silva and Mathews respectively which steadied Stars’ innings to a certain extent in the middle overs.

Nissanka made a valuable contribution with the bat scoring 42 runs off 39 balls but it was Mathews whose unbeaten 50 runs off 34 balls with 4 fours and 2 sixes gave impetus to Stars innings as they made 145 for 6 in the allotted 20 overs.

Chasing 146 to win, Giants got off to a shaky start losing the standing skipper Dickwella and number three batter Weerakkody inside the first 3 overs. However, in-form batters Salt and Liyanage rescued the innings adding a 48-run partnership for the 3rd wicket before the former lost his wicket for 32 runs putting their side in a good position at 68 for 3 in 9.1 overs.

Liyanage and Zadran finished things off for Giants guiding them home with a match-winning stand of 61 runs off 52 balls for the fourth wicket. Liyanage top-scored with an unbeaten knock of 56 runs off 47 balls with 5 fours for Giants.