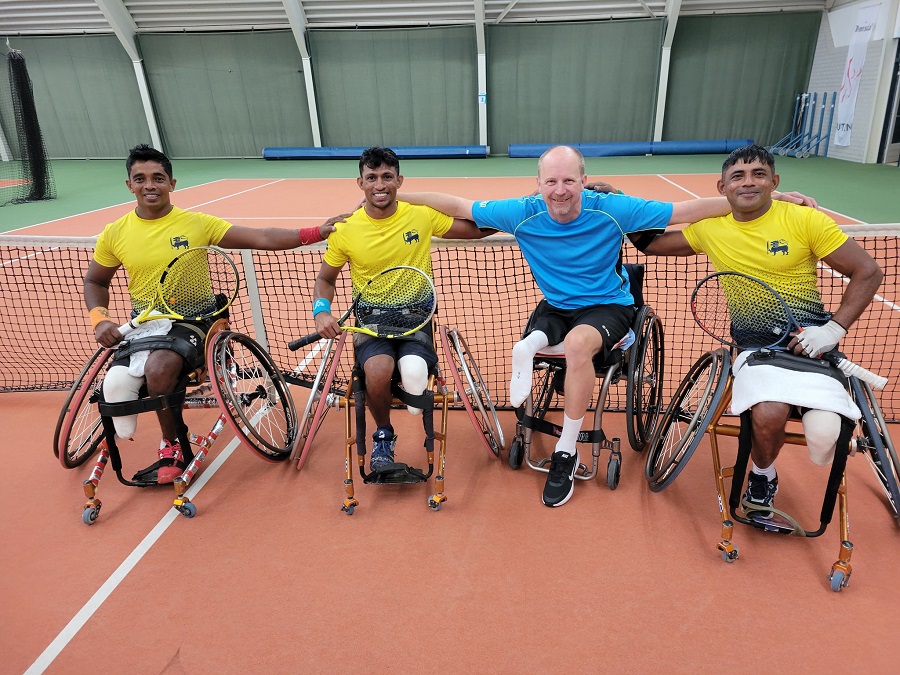 Teams from 23 countries, are set to contest the 2021 BNP Paribas World Team Cup when the ITF’s flagship wheelchair tennis team event returns to Alghero, Sardinia from 27 September to 3 October.

Team Sri Lanka comprises of recent Paralympian Suresh Ranjan, R Ranaweera and Gamini Dissanayake, who traveled to Italy to play their first World Team event for the year, the last one being in 2019.

Sri Lanka has been drawn in Group IV with France, Belgium and Brazil.

Titles will once again be decided in men’s, women’s, quad and junior events, with France looking to regain the men’s title from 2019 champions Great Britain, the two nations having contested the final in 2017 when the World Team Cup was first held in Sardinia.

On that occasion France won the men’s title for the eighth time and a repeat victory in Alghero will see France equal the record for most men’s titles, which is currently held outright by the USA.

While the World Team Cup was not held in 2020 due to the Covid-19 pandemic, the last nine editions have been won by men’s teams from France, Great Britain, Japan and Netherlands.

With the same four nations having recently filled the men’s singles and doubles medal podiums at the Tokyo Paralympics, it would be a surprise if this year’s men’s champions didn’t come from those four nations.

In 2017 Sardinia witnessed one of the biggest upsets in the history of the women’s event as China, P.R. became just the fourth team to lift the women’s title after defeating hot favourites Netherlands in the final.

However, there will be no Chinese team in Sardinia this time and with Netherlands having now extended their remarkable record to 31 titles since the very first women’s event in 1986, then it would be a shock of arguably an even bigger proportion if the Dutch were not to come out on top again.

Japan, France, South Africa, USA and Great Britain head the list of contenders for a place on the medal podium.

In 2008, when Italy hosted the World Team Cup for the second time, Netherlands won the quad title for the first and, so far, only time.

However, with Sam Schroder and Niels Vink having secured a Dutch victory at the World Team Cup Qualification event in Portugal in May before going on to bigger individual successes at the British Open, the Tokyo Paralympics and the US Open, then it would be little surprise to see Netherlands back on the roll of honour.

Japan, first-time winners of the World Team Cup quad title in Israel in 2019, and nine-time champions the USA join Great Britain among the medal contenders along with Brazil and Turkey, the latter who contest the quad event for the very first time.

With a wealth of established stars aiming to secure team honours for their countries in Sardinia, top of the list of this season’s emerging stars is 15-year-old Tokito Oda, who will spearhead Japan’s challenge in the World Team Cup junior event.

Oda, the first Japanese player to win the boys’ singles title at the Cruyff Foundation Junior Masters at the beginning of 2020, also became the sport’s youngest junior boys’ world No. 1 in April this year, aged just 14.

He has since won his first senior ITF 1 Series singles title and has Tokyo Paralympic silver medallist Tom Egberink among the list of top 10-ranked opponents he has beaten this season, while improving his men’s singles world ranking from No. 90 to a career-high No. 13. Japan has never won the junior title, but 2021 could be the year, while Netherlands, 2019 silver medallists Great Britain and France will all be among the contenders.

All seven days of the 2021 BNP Paribas World Team Cup will be available for fans to watch on livestream, with feeds from multiple courts via the event website.