Zimbabwe dominated the day 03 proceedings at Harare Sports Club in the 2nd Test of Sri Lanka tour of Zimbabwe. The all-rounder Sikandar Raza ran through Sri Lankan batting order to restrict them 293, giving Zimbabwe a lead of 113 runs.


Read More : Test in balance after Sri Lanka lose their openers; trail by 284

Sri Lanka resumed their innings on 122/2 on day 03, still trailing by 284 runs to Zimbabwe’s huge 1st innings score of 406 with overnight batsmen Kusal Mendis and Angelo Mathews on 19 and 4 respectively.

Lankans were on the defense for the first hour sneaking only 38 runs in 14 overs but, lost 2 wickets in quick succession as Kusal Mendis and Dinesh Chandimal were sent back to the dressing room by Sikandar Raza who consistently asked questions of the Lankans in the first hour.

Read More : Mathews back in top 20 after Harare double-century

Unfortunately, Kavin Kasuza was struck flush on the helmet once again by Mendis’ strong pull shot as the ball bounced up to square leg fielder, where Carl Mumba grabbed the chance with both hands. However, Kasuza was stretchered off the field by the medical staff after the blow, this being the 2nd time in this series this has happened. Kasuza was replaced by a concussion substitute in the first Test match after another serious blow by the same batsman.

After the two dismissals, the new man in Dhananjaya de Silva dominated the Zimbabwean bowling attack with his flawless strokeplay as he found boundaries at will. His partner Mathews joined the party with a few sixes off Raza’s bowling and reached his 35th Test half-century.  While doing so, he also equaled the record for the greatest number of sixes in Test Cricket by a Sri Lankan which is held by Mahela Jayewardene. 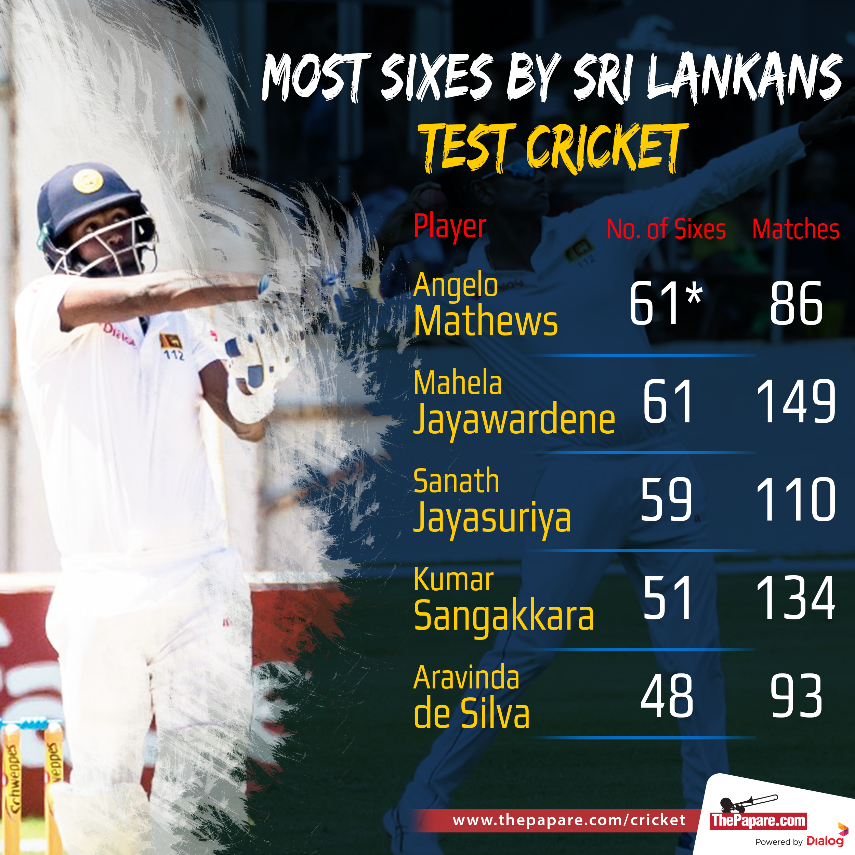 After a dominant partnership of 84 runs by Mathews and Dhananjaya, the latter threw his wicket away in the last over before lunch, leaving Sri Lanka 226/5.

After Lunch, Sri Lanka collapsed like a pack of cards courtesy of Sikandar Raza who claimed 7 for 113, which is the 2nd best figures by a Zimbabwean in Test innings. Mathews fell for a well-made 64 as he couldn’t repeat his heroics like last week. Zimbabwe’s lead was eaten by Vishwa Fernando who managed to add valuable 38 runs to the scorecard, reducing the lead to 113 runs.

At the stumps of day 03, Zimbabweans led Sri Lanka by 175 runs, adding 62 more to the total at a cost of only 1 wicket, as Vishwa Fernando dismissed Zimbabwe skipper Sean Williams for 13. Currently, Prince Masvaure and Regis Chakabva occupy the crease and will look to stretch their lead past 300 to challenge Sri Lanka on day 04.

Zimbabwe has only won Test matches against India, Bangladesh and Pakistan but never beaten Sri Lanka in their history.

“Despite all differences, cricket will bring people together” – Kumar Sangakkara