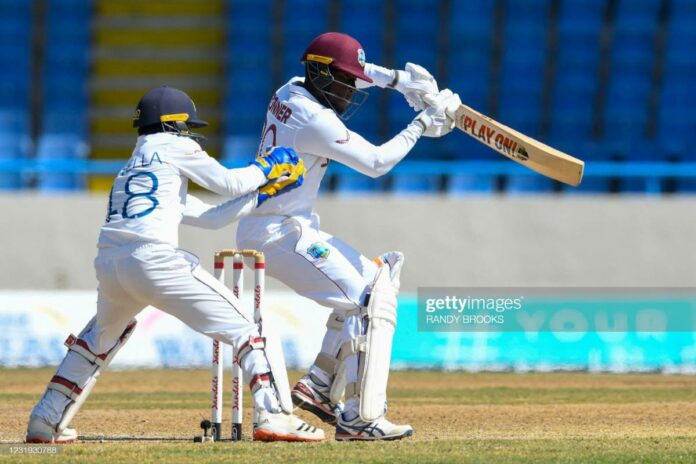 Jamaican Nkrumah Bonner produced his maiden century on the final day of the first Test match against Sri Lanka at the Sir Vivian Richards Stadium in Antigua to save the first Test and deny Sri Lanka a victory.

When his team needed someone to hold one end until stumps to ensure there would be no collapses, 32-year-old Bonner stepped up and played his part brilliantly. The West Indies were 236/4 as the two sides shook hands for a well-earned draw.

The start of play was delayed due to bad weather conditions but after 15 minutes of scheduled time, officials were able to get the players on to the ground. The equation was pretty simple for both teams; Sri Lanka needed 9 wickets for a win while the hosts needed 341 runs during the day’s play for their cause.

The hosts lost their opening batsman John Campbell yesterday and his partner Kraigg Braithwate succumbed to Lasith Embuldeniya’s spin for 23 in the morning session.  Brathwaite tried to defend after stepping out of the crease but the ball skidded on and found the gap between bat and pad to crash into the stumps.

That was the only success Sri Lanka tasted within the first two sessions of the day as the new pair Kyle Mayers and Nkrumah Bonner constructed a brilliant partnership to trouble Dimuth Karunaratne’s tactics. Karunaratne was a bit defensive setting the fields even in the early part of the 4th innings with a lot to defend.

The pair added 105 runs for the 3rd wicket, playing risk free cricket as the visitors were made to toil in search of a wicket. This pair also added 216 for the 4th wicket vs Bangladesh in Chattogram earlier this year as WI chased down 395 in the 4th innings. With this partnership the duo became the first to have added 200+ and 100+ in their first 2 partnerships in the 4th innings of a Test.

Karunaratne and the Sri Lankan bowling unit tried different plans but the pitch granted no assistance at all. The 5th day pitch at North Sound ground showed no signs of deterioration to make the spinners come into play and the swing disappeared too compared to first 3 days of the Test match.

Left arm spinner Embuldeniya managed to strike again just after the Tea break restricting Kyle Mayers for 52 and also diminishing any hope of a West Indian win. However, from the other end Bonner notched up his maiden Test century holding the West Indian innings on his shoulders. Bonner had some luck with him as no one appealed for a caught behind before he was into double figures and an umpire’s call LBW shout when he was on 95.

It seemed Sri Lanka’s only hope was the introduction of the new duke, but that also didn’t work. Vishwa Fernando, Suranga Lakmal and Dushmantha Chameera, all tried their best in the evening session but to no avail.

With this draw, both teams share 20 points each in the points table of the ICC World Test Championship even though it is not relevant right now with two teams (India, New Zealand) having already qualified for the finals.

The 2nd and final Test of the tour will be held at the same ground on 29th March starting from 7.30pm Sri Lankan time. Keep logged into ThePapare.com for latest updates, reports, scorecards and analysis of this series.