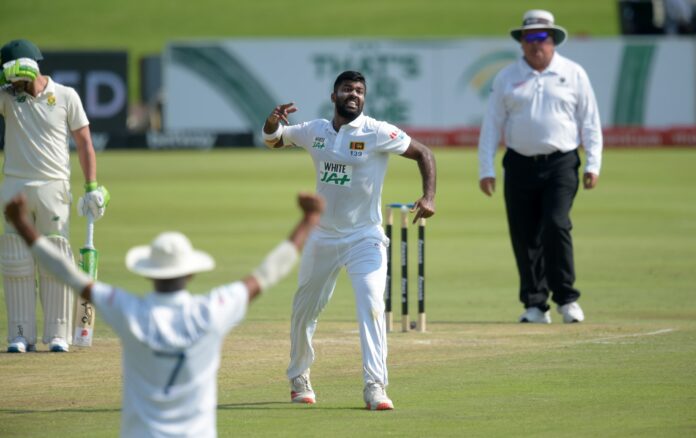 The visitors had a decent second day of play at Supersports Park with their highest ever Test score in South African soil on board and the top-order of the home team back in the hut at close of play.

Lankans added 56 more runs to their total in the morning session, courtesy Dasun Shanaka for his fierce knock of 66 runs. He struck 5 sixes and 3 fours in his confident display of batting as shepherded the tail for good effect.

With anything around 320 being a competitive first-innings score at Centurion, Sri Lanka was quite delighted to have 396 on board despite being struck by injuries. Dhananjaya de Silva who is nursing a grade two tear in his left thigh muscle, is ruled out of the Test and his teammate Niroshan Dickwella said, “he might walkout if we need him very badly.”

The South African openers, Dean Elgar and Aiden Markram, orchestrated a setback for the visiting team by putting up a 141-run stand for the first wicket. The Islanders were further depleted by injuries as Kasun Rajitha, who had a vital role to play in Sri Lanka’s bowling outfit, walked off in his 3rd over with a slight niggle in his hamstring. Lankans were forced to bring in their second-choice pacemen Dasun Shanaka to the frontline. They even introduced spin pretty early in the innings as nothing seemed to be working.

But, this rejuvenated Sri Lankan side seems to have got one thing right. That is the ability to regroup and fightback as a team whenever they are put to the backfoot. They showed it with the bat after losing early wickets, and again with a few quick blows when the South Africans were trying to run away with the game.

Day 1:  Chandimal, Dhananjaya put Sri Lanka ahead in the race

Vishwa Fernando was toiling hard for wickets and kept teasing the edge for a long while in the game. It has been the case in this game, wickets were priced very high that the bowlers had to grind hard for a prolonged period of time to earn each one. The difference in the Lankans were that they were more disciplined with the line and operated at a much fuller length than the home speedsters. Vishwa was rewarded with a Markrams wickets which motivated the rest to stick to the course. Markram made a flawless 68 runs with 14 boundaries to his name.

Elgar looked threatening at the crease as he found his timing early in the innings and drove the ball firmly into gaps. He made a relatively quick 95 at a strike rate of 73 hitting 16 fours along the way. The southpaw’s spectacular knock came to an end as he threw his wicket away by hitting one straight back to the bowler. That was the only false shot he played in his innings.

Rookie Rassie van der Dussen and the skipper Quinton de Kock were undone in quick succession opening up the game furthermore for the Lankans.

From 220 for 4, the former South African skipper, Faf du Plessis, and Temba Bavuma instilled stability by putting up a responsible partnership of 97 runs till close of play.

Proteas ended the day at 317 runs for the loss of 4 wickets with another established batsman in Wiaan Mulder left in the dressing room.