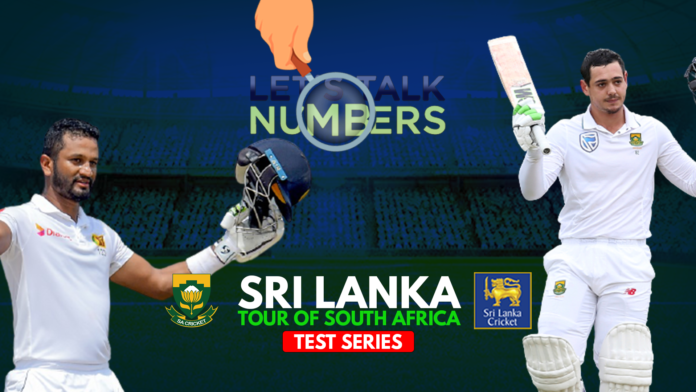 Sri Lanka will be playing 2-Test matches in South Africa in December and January which will be part of the ICC World Test Championship. Let’s take a closer look at the Test numbers between these two sides.

The match was played in 1993 at Moratuwa. The home team closed in on a historical win against South Africa but were denied by a heroic effort from Jonty Rhodes. The hero for Sri Lanka was skipper Arjuna Ranatunga who mastered a 131 in the second innings, setting the visitors a target of 365 runs. The visitors were reeling in the pursuit at 92/4 and then 199/7 but an outstanding unbeaten 101 by Rhodes saved the day as they survived on 251/7 at close.

Arthur opens up on team selection and preparations in South Africa

Prior to Sri Lanka’s last visit to the rainbow nation, they played 10 Tests and managed a solitary win. Their only victory was a 208-run win which came in Durban in 2011.

However, Sri Lanka managed to turn things around in their last tour as they won both matches, including the miraculous win at Durban thanks to a once in a lifetime innings by Kusal Perera.

Sri Lanka haven’t played a Test match at Centurion since 2011 and have lost all 4 matches they’ve played at the venue.

At the Wanderers Stadium, Johannesburg