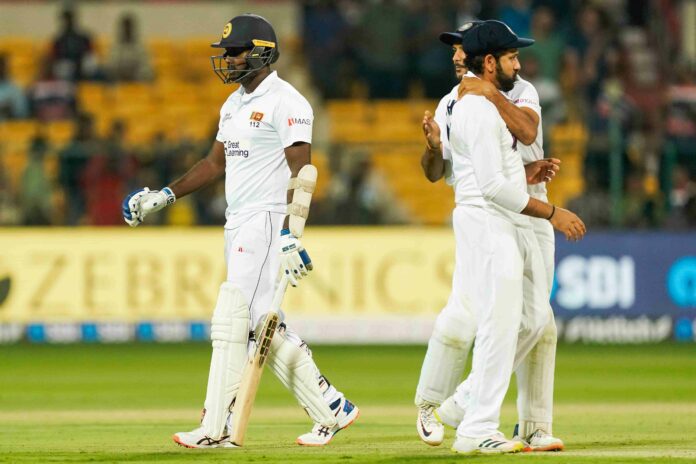 Sri Lanka were left tottering on 86/6 in response to India’s 252 at stumps on day 1 of the 2nd Test between the sides at the Chinnaswamy Stadium in Bengaluru.

A low-scoring game seemed inevitable when signs of deterioration in the pitch became apparent as early as the 8th over of the game. With this being the case, Sri Lanka would have hoped they could restrict the hosts to below 200 but it wasn’t to be as their nemesis from the T20I leg of the tour, Shreyas Iyer, played the innings of his life to lift India to 252.

While wickets fell around him, Iyer took the attack to the opposition, going at a strikerate above 90 for most of his innings. With the ball keeping low and being dismissed thanks to something happening off the pitch seeming an inevitability, Iyer took on the mantle to push India towards what now seems like a match-winning total.

Earlier in the day, Suranga Lakmal, in his final game for Sri Lanka, moved the ball both ways, but was unable to get the Indian batters to play as many as he would have liked. Regardless, he was the most economical bowler for Sri Lanka, while the spinners went for plenty, particularly off the bats of Iyer and Rishabh Pant.

Pant came in ahead of Iyer, to negate the effect of the two left-arm spinners, and once again shifted the momentum of the game decidedly towards India with 39 off 26 before Iyer took over. It didn’t help that Pant was dropped on 4 by Suranga Lakmal at deep mid-wicket – a trap set for the new batter as he came up against spin.

While the track spun prodigiously in the 2 evening sessions, the seamers had their time in the last session of the day, with the ball seeming around consistently. Jasprit Bumrah was as menacing as ever alongside Mohammed Shami.

Angelo Mathews looked the most assured of the Sri Lankan batters but will be disappointed he didn’t kick on, guiding a Bumrah slower ball straight into the hands of Rohit Sharma at slip with just 2 overs to go in the day.

Sri Lanka will commence day 2 with Niroshan Dickwella and Lasith Embuldeniya looking to get Sri Lanka as close to India’s 252 as possible.