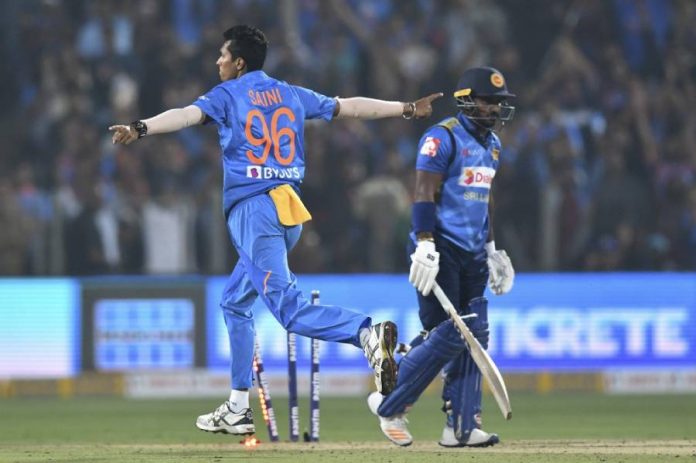 Sri Lanka suffers another humiliating defeat at the hands of their neighbors in the 3rd and final T20I at Maharashtra Cricket Association Stadium, Pune as they handed the series 2-0 to India after a 78-run loss.

Sri Lanka skipper Lasith Malinga finally had his luck with the toss and asked Virat Kohli’s men to bat first at the high scoring Pune ground. Sri Lanka made room for Angelo Mathews and Lakshan Sandakan in the playing XI at the expense of Bhanuka Rajapaksha and injured Isuru Udana while India tested their bench strength with Yuzvendra Chahal, Sanju Samson and Manish Pandey in the mix.

Battle for the opener’s slot

After being placed to bat first, India openers KL Rahul and Shikar Dhawan started the fireworks from the beginning as they went after Lasith Malinga and his new opening partner with the ball; Angelo Mathews who donned Sri Lanka Jersey in a T20I after 16 months.

Both batsmen matched shot to shot in their mission to seal the remaining opener’s slot in Indian top order to accompany Rohit Sharma who has been rested for this T20I series. Pair put 63 runs in the powerplay and hammered Sri Lankans to all parts in their 106-run opening partnership.

With the introduction of wrist spinners by captain Lasith Malinga, Indians had to put on brakes as wickets started to tumble from both ends. Chinaman Lakshan Sandakan announced his return grandly as he used his loop and dip precisely to deceive opposition batsmen, registering 3 wickets.

#INDvSL | ?? finished strong at the death with Thakur and Pandey

But, It was Lakshan Sandakan who stole the show for Sri Lanka

He was well-supported by Wanindu de Silva who confused Sanju Samson with his deadly googly to tick his wicket column. Thanks to this duo, Indian batting blitz was silenced for a short period as India could only muster 62 runs off their 8 overs.

India rocketed to a final total of 201 which is a target Sri Lanka has never chased before in a T20I.

Chasing a mammoth target of 202, Sri Lankan top order failed spectacularly as they were reduced to a 35/4 after the powerplay. Lankans were beaten for pace by Jusprit Bumrah and Navdeep Saini who clocked around 140kph troubling the opposition.

The only respite was given by Dhananjaya de Silva and Angelo Mathews who rejuvenated Sri Lanka chase to take the required rate down to 13. Mathews reminded everyone the power he possesses as he dispatched the Indians spinners for 3 massive sixes on his way to 31 off 20 overs.

The rest of the batting unit toppled like a pack of cards sealing a 78-run win for India as Navdeep Saini shinned again with a 3-fer. This is India’s 6th T20I series win over Sri Lanka who has never tasted a series win against India.

The rest of the batting unit toppled like a pack of cards sealing a 78-run win for India as Navdeep Saini shinned again with a 3-fer. This is India’s 6th T20I series win over Sri Lanka who has never tasted a series win against India.