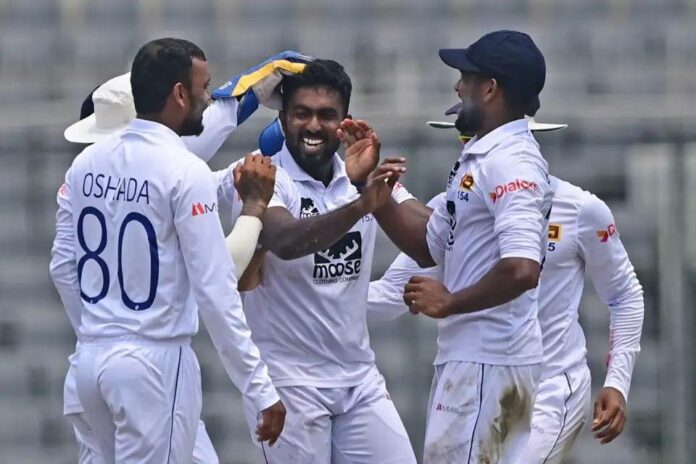 Mirpur, traditionally a venue with a high rate of success for spinners, turned into a paradise for the fast bowlers as the Sri Lankan duo of Asitha Fernando and Kasun Rajitha scalped a total of 17 wickets out of 20 to lead the way in a dominant 10-wicket win over hosts Bangladesh.

After a morning session which gave Sri Lankans only 1 wicket, Asitha Fernando returned to the attack and demolished the Bangladeshi lower order to take a 6-wicket haul. He also completed a 10-wicket haul which made him just the 2nd quick bowler from the island nation to achieve this feat and the 10th overall.

With just 29 runs to get, Oshadha Fernando and Dimuth Karunaratne made short work of the target as the visitors registered a thumping 10 wicket win over the hosts. This win also gave Sri Lanka the series win along with 12 important points in the World Test Championship.

Rajitha, who provided the initial opening in this match for Sri Lanka on Day 1, took 7 wickets in the match. The centuries by Angelo Mathews and Dinesh Chandimal were the highlights with the bat for Sri Lanka as that 199 run stand for the 6th wicket made sure they had a sizable lead to put the hosts under pressure.

For his immaculate spells of bowling to take 10/144, A. Fernando was adjudged Man of the Match while Mathews who scored 2 centuries in 3 knocks at an average of 172 to amass 344 runs was named Man of the Series.

At the beginning of the series there was a lot of talk about how the Sri Lankan pace bowlers would perform without Suranga Lakmal, but it’s fair to say that though they were dubbed as inexperienced they outclassed Bangladeshi batters from the word go and executed their game plans to perfection.

Before the start of the series the newly appointed head coach Chris Silverwood spoke about how it’s important to stay patient and bowl in one area continuously to bring out a mistake from the batsman and how it’s important to use your variations effectively. If you watched the match closely, you will clearly notice that the duo of A.Fernando & Rajitha doing exactly that.

This result meant that the brand-new Head Coach Chris Silverwood & Assistant Head Coach Naveed Nawaz had a picture-perfect beginning to their stint with Sri Lanka. Coming up next for the Sri Lankan red ball outfit is a 2 match home series against the reigning number 1 team in the WTC table Australia.