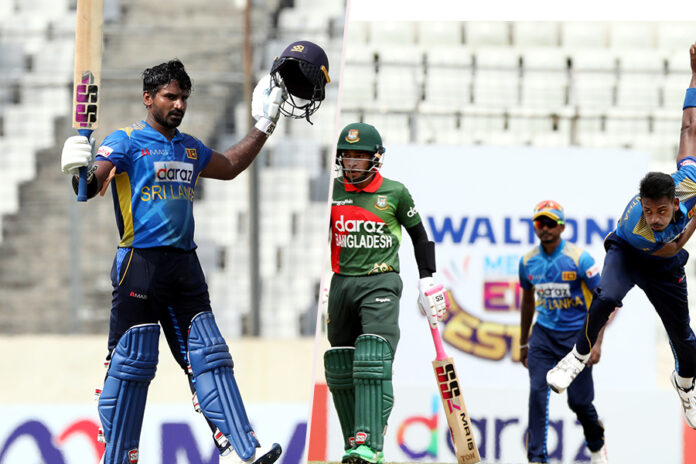 Though Bangladesh had the series in their bag, Sri Lanka recorded a spectacular win to lift spirits for their march forward.

The new-look Sri Lankan outfit have finally managed to secure their much-needed victory in the final ODI of their tour to Bangladesh. Coming into the dead-rubber with 4 changes to the playing XI, the Lankans handed the debut cap for 3 young guns – Chamika Karunaratne, Ramesh Mendis and Binura Fernando.

It seemed like the decision of this game was defined at the toss as Kusal Perera won it and opted to bat first, taking away the rigid scoreboard pressure that was too heavy to carry for this inexperienced batting unit.

This time with more freedom, the visiting openers fired on all cans racing their way to 77 runs at the end of the first Powerplay – The highest Powerplay score prior to this was 49 runs in this series.

That kind of start meant that the Islanders were not gonna fall anything short of a winning total. Their Skipper, who struck a captivating century, led the team from the front as they posted a mammoth 286 runs on board, in context of how this series operated.

Kusal Perera’s century included 11 fours and a maximum as he ended a swashbuckling knock on 120 runs. It was followed by an anchoring half-century from Dhananjaya de Silva.

Taskin Ahmed was the pick of the bowling for Bangladesh with 4 scalps to his name, but what stood out was how Sri Lankan batsmen handled the two top guns of Bangladesh in this bowling innings. Both Shakib Al Hassan and Mehidy Hasan Miraz were deprived of wickets and leaked 48 runs a piece. This put immense pressure on the rest, and gave an edge to the visitors.

As for Sri Lanka’s bowling front, it seems that they have discovered a gem in Dushmantha Chameera version 2.0. The seamer was rapid, accurate and lethal.

He showed a glimpse of improvement during the first edition of Lanka Premier League which marked his comeback. However, it is only in this series that he glowed brighter than ever. He equalled the Sri Lankan record for the highest wickets in a 3-match series, along with the great Muttiah Muralitharan, Chaminda Vaas and Thisara Perera, by bagging 9 wickets. The lean speedster also wrote his career best figures of 5 for 16, which earned him the Man of the Match trophy.

Sri Lanka also got vital spells from the spinners Wanindu Hasaranga and Ramesh Mendis as they picked 2 wickets each.

The hosts went down for just 189 runs as Mahmudullah Riyad fought a lone battle with 51 runs to his name.

As the saying goes, “there are no dead-rubbers anymore in the ODI Super League.” Hence for Sri Lanka, this consolidating victory is worth much more than it appears to be. This team will next embark to England for a white-ball assignment, and this win will hopefully be a confidence booster for this young Sri Lankan outfit.