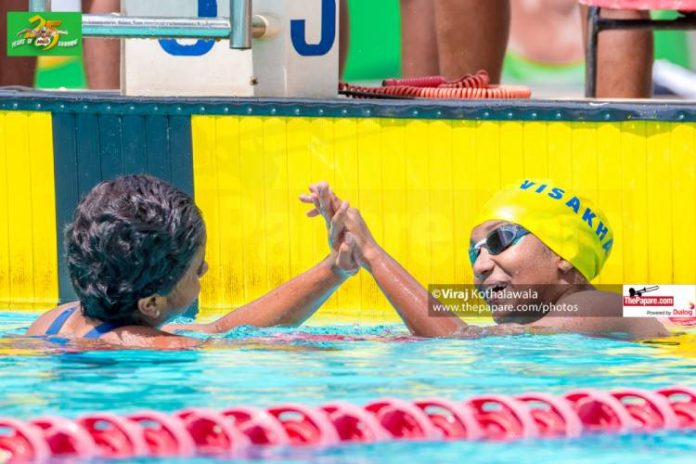 Visakha Vidyalaya moves up to the top spot of the Girls’ team standings, at the end of day 2, at the 12th Annual Sri Lanka School’s Novices Swimming Championship 2019.

2018 National Aquatics champions, Visakha Vidyalaya impressed with their junior and senior swim teams over the first two days of the Novices Swimming Championship to move up to the top of the table, with a rather comfortable lead over the rest.

In the junior age groups, Senudi Dunusinghe of Visakha Vidyalaya managed 2 first place finishes. She topped in the Girl’s U12 50m Breaststroke event in 1:07.31 minutes and later swam the 50m Butterfly lap in 1:13.14 minutes.

Sanuji Goonetilleke emerged champion in the Girls U12 50m Freestyle, over 230 swimmers, with a winning time of 37.39 seconds. Binuthi Withanage grabbed a Gold in the Girls U16 50m Butterfly event with a final timing of 38.51 seconds.

Who will challenge Hillwood and Ananda this year?

Sarisha Senanayake performed well in the Under 18 category winning Gold in the 50m Butterfly with a time of 41.73 seconds, and a Silver in the 50m Breaststroke clocking 49.76 seconds. She also tried her luck in the Girls 200m Individual Medley but could only collect a 4th place finish.

Chethya Liyanage managed to steady the fort in the Girls U20 category winning two Bronze medals and a Silver in her events. She swam the 200m Individual Medley in 4:22.00 minutes to finish second behind R A S Vihansa of Yasodara Balika Vidyalaya who emerged as champion with a time of 4:14.74 minutes.

Chethya went on to win her Bronze medals in the 50m Breaststroke and the 50m Backstroke clocking 53.92 seconds and 51.95 seconds respectively.

The Boy’s age groups will kick off tomorrow, 23rd February, starting with the under 10, 12 and 20 age groups.

Keep it logged to ThePapare.com for latest updates and photographs from the 12th Annual Sri Lanka School’s Novices Swimming Championship 2019.