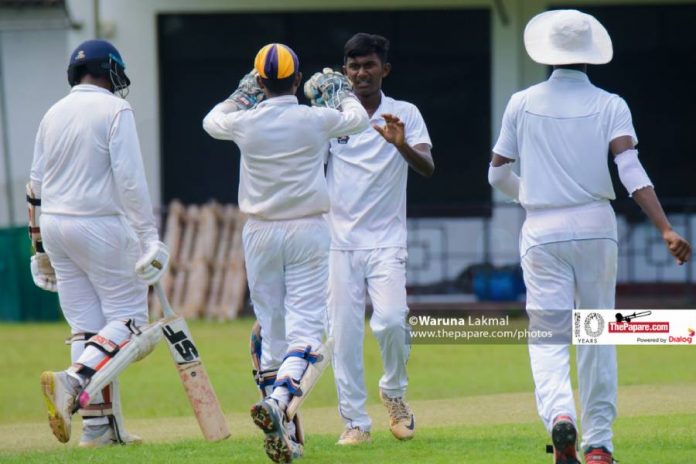 Lumbini College hosted the Wennappuwa school at Colts grounds. The visitors won the toss and chose to field first. The hosts were humiliated at their adopted home grounds as they succumbed meekly for just 83 runs.

Only one batsman managed to pass the 20-run mark in that unimpressive Lumbini innings. Nipuna de Silva was on destruction mode as he ran havoc through the Lumbini batting line-up. He picked up 7 wickets for just 20 runs.

St. Joseph Vaz College went past the target in 16.3 overs although they lost 7 wickets. Pasindu Dasanayaka struck 28 runs for St. Joseph Vaz while the off-spinner Thashika Nirmal picked up 3 wickets for 40 runs to top the bowlers chart for Lumbini College.

The game was worked off at Asgiriya where the Kandy school won the toss and elected to put runs on board first. Skipper, Abishek Anandakumar led his pack from the front with a brisk 65 runs up the order while Umair Reshan brought up a half-century.

Sadishan Chamodya was the pick of the bowlers for Mahanama College as the right-arm off-spinner bagged 4 wickets for 47 runs.

Trinity College ended with 184 runs on board after losing all their wickets in 48.2 overs.

In reply, Mahanama College managed only 137 runs as they were given a revised target of 179 runs in 46 overs as the game was interrupted by rain. Vinuka Rubasinghe fought alone as the left-hander was left stranded at the crease without a partner with an unbeaten 50 to his name.

Senuka Illukkubura claimed 4 wickets for 21 runs to be the most wicket-taker for Trinity as his alma mater recorded a 42-run victory.

Video – Can Sri Lanka execute better in the do-or-die game?...