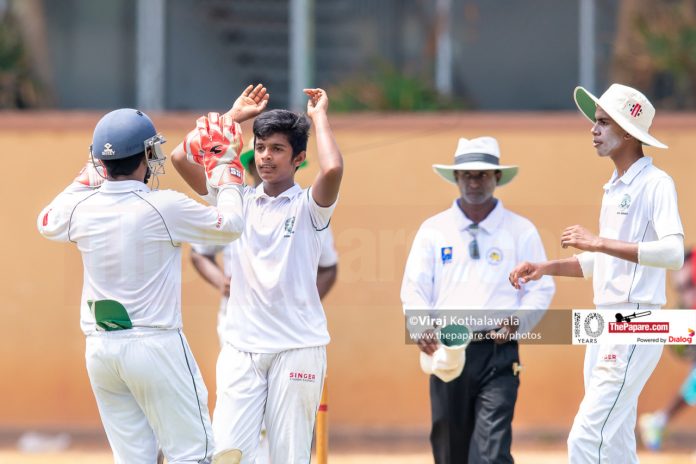 St. Benedict’s College defeated St. Anthony’s College, Wattala in their own den today, 06th August 2019, whilst St. Joseph Vaz College suffered a 10-run loss at the hands of Trinity College in the second round games of U17 Division 1 Tournament 2019.

Boys from Kotahena won the toss and elected to put runs on board first. They had a rather slow outing as they only managed to score 161 runs in 48 overs after losing all their wickets.

Thenuka Nandalal struck a valuable 44 runs for his school while the Antonian skipper, Kavindu Gamage picked up 3 wickets for 24 runs with his off-spin.

In reply, the home team fell meekly for 114 runs. Isuru Lakshan was the star assassin with the ball as he bagged 6 wickets for 24 runs. Off-spinner Ashen de Soyza joined him in the kill with 3 wickets to his name.

The game was played in Godigamuwa where the Kandy school won the toss and elected to bat first. Ranuda Somarathne led the batting for Trinity College as the youngster scored a fighting 60 before running out of partners. But, he never got enough support from his teammates as the next best score was just 21 runs.

It was a rather ordinary reply from the boys from Wennappuwa as they were undone for just 114 runs. Only two batsmen managed to go past the 20-run mark for St. Joseph Vaz College.

Mathisha Pathirana was the pick of the bowlers for his figures of 3 for 36 as Trinity College recorded a nail-biting win.