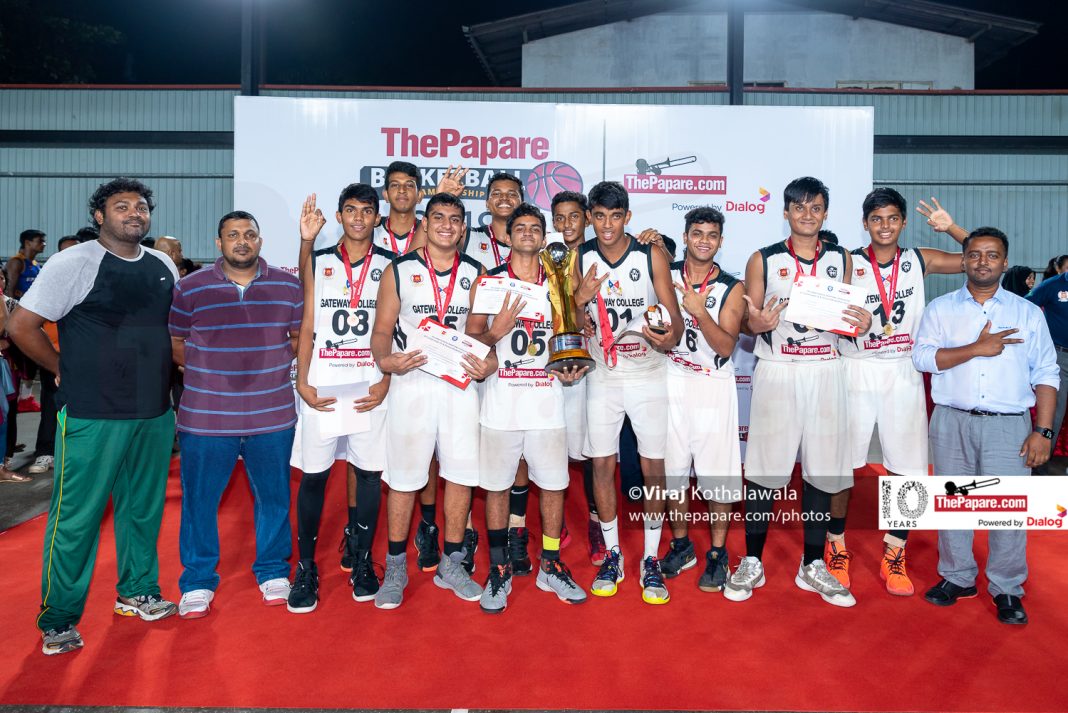 Mirtesh Thurairaja got GCC off to a flying start with back-to-back 3 pointers which exerted pressure right back on SPC. For the Peterites, it was their skipper Kusal Kodithuwakku who opened the scoring, converting a lay-up, taking down two defenders with him.

The final was an equal match-up, with both teams of similar build. It was a healthy contest in the middle for the boards, but the ball drenched with sweat slipped through every-one`s hand during most times.

SPC commenced the game trailing, however the adoption of a much faster game during the latter 5 minutes of the quarter, put them ahead at the end of the maiden ten minutes, 14-19.

It was a raining three-pointers from both ends as SPC added 16 points in the second quarter while GCC replied with 15. Both sides penetrated heavily from all three-lanes which made is tough to defend from both the ends. In the second quarter, it was SPC who topped the cards with the boards, which included a three-man follow-up play which shifted the momentum. SPC led the game into half-time courtesy of their early lead in the first quarter. Half time scores read, 35-29.

Following the ten-minute break, GCC did not get onto the best of the starts as SPC extended their lead to 10 points inside the first two minutes of the penultimate quarter. Even-though the start was faulty GCC made-up by scoring a game-high of 21 points and leaking only 8 points.

It was the full-court press that was adopted by GCC that turned tables around in the game. With the pressure building, SPC lost their momentum, and with the full-court press, the conversion rate of the shots dropped down drastically. GCC capitalized on the forced errors and equalized at 43 all.

GCC grabbed a lead of 7 points, 50-43 in the dying seconds of the third quarter and ensured they held fort till the final whistle. In the final ten-minutes, GCC added 25 points and SPC replied with 24. Even though the stats differ from just a point, SPC needed to convert three to four possessions at a stretch to get back into the driving seat of the game.

Unfortunately, SPC missed the trick in swishing the nets and the ball ended up on the edge of the ring or was over-thrown in two possessions. It was the third quarter, full-court defensive ploy that rattled the SPC flow, which GCC used to find to continuous attack and finish off as the winners.