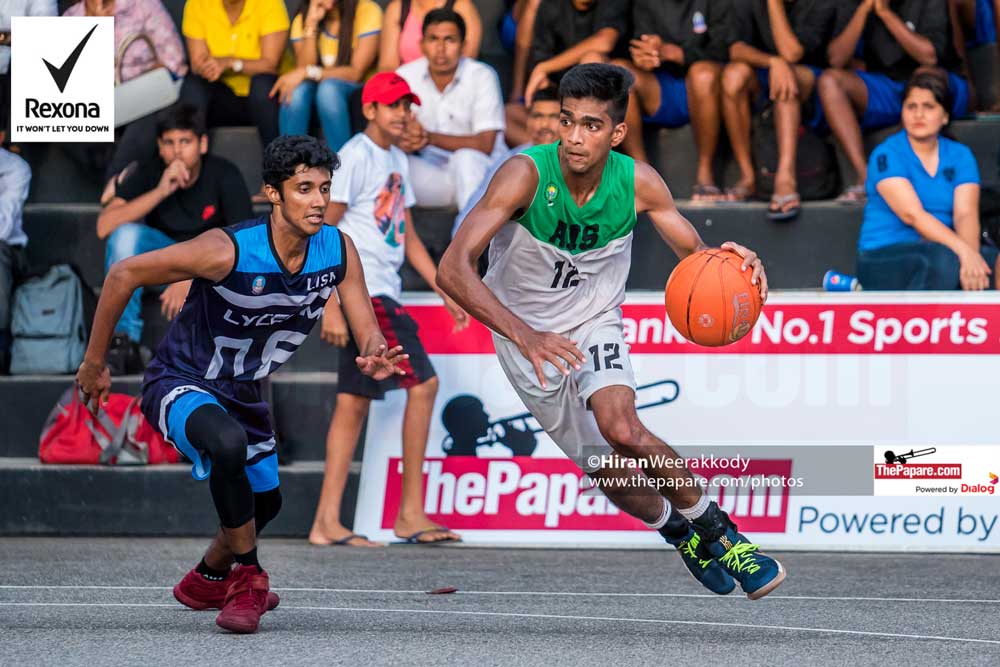 It was a slow start from the tip off as both teams struggled to find the net. AISJ shot multiple back to back threes and scored consistently to take an early lead. Nevertheless, later in the first half GCC’s Dinura Dissanayake scored a few baskets from behind the arc and managed a few fast breaks to help GCC cut the lead back to 1 point.

With a tactical change on defence by GCC pressuring the key players of the opposition, GCC claimed the lead early in the second half.  Chenuka Kasthuriarachchi, recording quite a number of blocks helped to improve GCC’s defence to extend the lead to 7 points.

As the game progressed, AISJ did fight back to cut the lead back to 5 points and kept fighting to stay alive in the game but as time ran out, GCC manage to hold AISJ off and progress to the semis.

LISN started the game strongly, managing to get some steals and opting for fast breaks as they took the lead early in the game. LISN’s Arshad Rafeen shot multiple shots behind the arc and drove in for lay ups to keep the momentum of the game with LISN.

Nevertheless, AIS later in the 1st half found the rhythm to score baskets by penetrating the defence and scoring via lay ups. Multiple mid rangers and three pointers from Joel Perera and Abdul Khaldeen helped AIS to cut the lead to 3 points at the end of 1st half.

AIS managed to extend the lead to 10 points due to the consistent scoring by Joel Perera and Abdul Khaldeen. However, with a few steals converted to points on the other end and a three from Sanjaan Gunaratne, AIS managed to tie the game 49 all at end of the third quarter.

Towards the last moments of the game, AIS quickly swung the momentum back in their favor. With a much improved defence and pressuring LISN’s key player Arshad Rafeen, they put the brakes on LISN’s scoring.

With time running out, AIS’s game plan was to simply to hold the ball and run off the clock thus managing to kick LISN out of the tournament.

From the tip off both teams started strong, scoring back and forth. However later into the game SJC started to struggle to find the net due to an improved zonal defence by STC. STC managed to take the lead to double digits by half time due to a bit of help from Shevaan Perera scoring multiple threes and lay ups.

SJC fought back with help from the Fernando brothers Shehan and Shamin as they managed to cut the lead back to 7 points. However, it did not stop the Thomians from scoring as they managed to swing the momentum back in their favour, shooting multiple shots behind the arc, mid rangers and second chance points to come up with an easy win with a lead of 20 points.