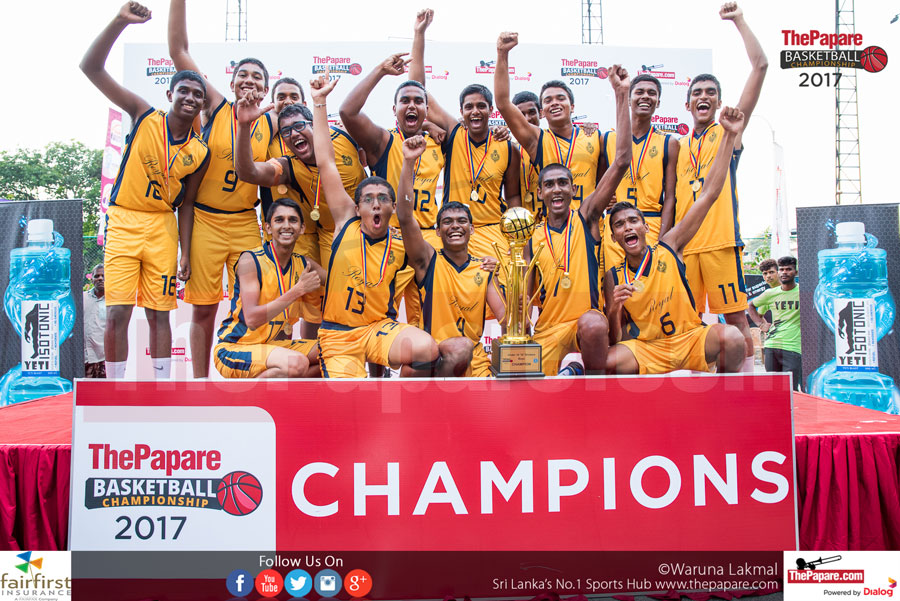 ThePapare Basketball Championship 2017 came to a close as Royal College emerged champions in the boys` category beating St. Joseph`s College in the final that took place earlier today. Both teams walked into the middle unbeaten but the Reid Avenue lads triumphed with the full-time scores reading, 33-48.

The Joes won the tip-off but failed to convert it into a scoring possession but went on to draw first blood in the game, converting one shot off the charity strike. Royal College did not score until the final minutes of the first quarter as Joes led the game 3-0 in the 1st 5 minutes of the game.

It was Heshan Hansika who got the party stated for Royal College, bringing full value to a fast break in the seventh minute of the game. RC settled into the game from then on and went on to lead the game by four points at the end of the quarter (7-3).

Royal College walked into half time keeping up the lead from the first quarter. The key for the Reid Avenue lads was the rotation of the ball around the perimeter which gave them the chance to hit the lapses created by the opposition defense.

While charging up on the offensive, RC also changed their defensive tactics from man-to-man to a half court press which blocked off much of the Josephian possession. The scores at half time read 19-14 in favor of Royal College.

Going into the third quarter, after the ten-minute break, the Joes were taken by surprise by the Royalists and failed to adapt to the fast-paced game. Converting the fast breaks into points and holding the defense off, put RC in the driving seat.

Pressure created by defensive lapses transferred to their offense as well and rushing through their set plays and making unforced errors cost the Joes the quarter. The second chances were converted handsomely by RC while they went on to create an eight-point deficit, capitalizing on jumpers. The score at the end of the third quarter read, 30-22.

If the Joes were able to press RC full court in the third quarter and break off momentum, things would have looked different coming into the final quarter. SJC was unable to finish off the layups and lay-ins as they rolled over off the rim. It was unfortunate as RC stuck to the basics and took SJC by surprise.

Even though Joes did score consistently in the final quarter, the lead given away in the second and third quarters came back to haunt them in the end. The full-time scores read 48-33 in favor of Royal College.

SJC Coach, Roshan Randima speaking to ThePapare.com said, “We lost it on the defense, we didn’t maintain the tight defense we had in the previous matches”

RC Coach, Prasanna Jayasinghe speaking to ThePapare.com said, “We changed up our game plan after the first half and took them by surprise that’s been our strategy since the semi-finals to change things up half way through the game and to capitalize on the fact that our opponents don’t expect the change”