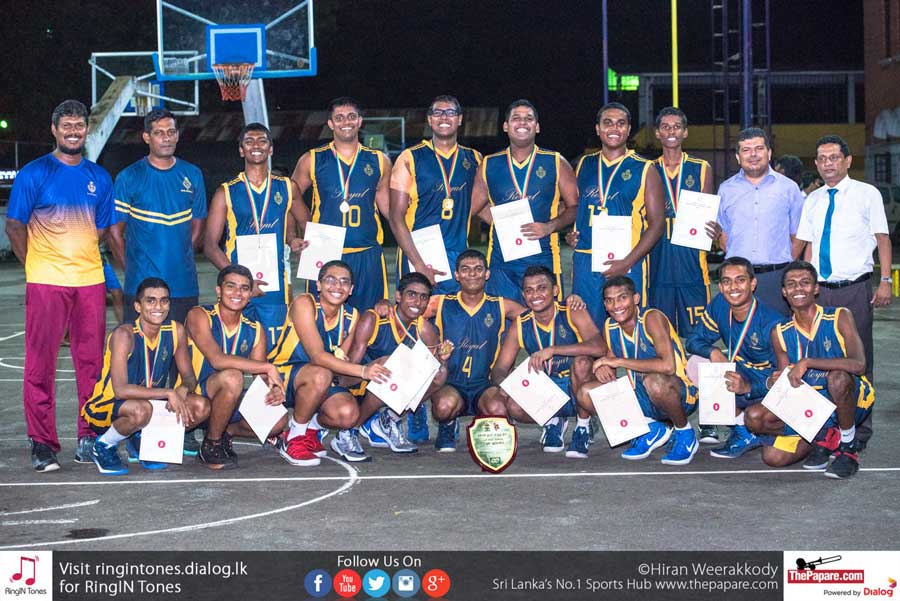 Royal College claimed the title at the National School Games Basketball championship while Lyceum International Wattala and Maristella College Negombo managed to finish as 1st and 2nd runners up respectively.

The Captain of Royal College speaking to ThePapare.com, ‘We have been training hard for this tournament for the past couple of months. We have practiced well and I think all our players are key players for us, so today we are going to play our best and bring back the trophy’.

LISW Captain speaking to ThePapare.com, ‘We have been practicing since June for this tournament and the inter-international tournament. Today we are going to mainly focus on our defence because we believe that a good defense can bring the championship.”

Royal College had first possession of the ball however it was LISW who got the first basket. LISW used a man to man defence while Royal opted for a full court defence. The LISW players had a slight advantage when it came to height, giving them the edge when it came to defence and collecting rebounds. The 1st quarter was very tight and it ended with LISW leading by only one point. When the 2nd quarter came around, the LISW players struggled to penetrate the Royal defence while Royal managed to get things going and take a considerable lead. LISW was unable to control the ball as they failed to get their layups and free throws in this quarter. At half time RC led by 10.

As the third quarter began LISW was able to reduce the deficit between the two teams by getting a couple of consecutive baskets. LISW came up with a tight defence and stalled the progress of Royal. By the end of the quarter, the tables had turned on Royal as LISW took the lead by one point. During the final ten minutes, LISW collected many rebounds and took more second shot opportunities while two of Royal’s top players were fouled out in the last quarter. LISW switched up their defence to a full court press and as the quarter ended the scores were level, sending the game into overtime.

In the extra five minutes, both schools went neck and neck game LISW had a few chances to seal the game but missed opportunities cost them in the end as Royal ran out winner by 5 points.