Sri Lanka’s dreams of progressing to the top 12 at the Netball World Cup, took a huge blow as the Lankan lasses lost their 2nd game of the tournament 67-50 against Northern Ireland.

Though they put on a fighting effort in their tournament opener against Zimbabwe last evening, Sri Lanka suffered a 30-goal loss, dampening their chances of finishing within the top three in group A.

Northern Ireland hammered the 2nd nail in Sri Lanka’s coffin with a strong show at the M&S Bank Arena Courts in Liverpool.

The teams traded a goal apiece at the beginning of the game, but Ireland then went on a 5-0 run to wrest the initiative away from the Lankans. Sri Lanka kept scoring off their own possession but were unable to turn over the ball and string together a few goals consecutively. The first quarter ended in Northern Ireland’s favor 18-13.

It was a similar story to what happened against Zimbabwe once again today as Sri Lanka started the 2nd quarter strong, trading goal for goal with the Irish, but once again they fell away to concede a 4-goal lead in the quarter.

Tharjini Sivalingam was put off her game by some physical defending from the Northern Irish girls and was taken out during the latter part of the half and replaced by Elilenthini Sethukavalar, who was making her debut at the World Cup.

Dulangi Wannithilake, switched over to Goal Attack early in the game, made a few shots early in the third quarter to get Sri Lanka back into the game, but defensive errors and the inability to turn the ball over came back to haunt the Lankans.

Northern Ireland on the other hand moved the ball quickly across court and although they were not as accurate as the Lankans with shots on goal, they had more opportunities to score because of their defensive work. They took the 3rd quarter 17-12, ensuring that Sri Lanka would have a 14-goal deficit to overcome in the final quarter of play.

With only Australia left to face in the group stage of competition, it was do or die for Sri Lanka in the final quarter against the Northern Irish, but unfortunately, they were unable to pull through to register a win.

Passes kept going astray and the mid-court was just unable to put any pressure on the opposition, who moved the ball freely across court to seal the win with a 16-13 quarter.

Sri Lanka’s shooter Tharjini Sivalingam had a poor day on court by her standards, managing just a 90.2% success rate, as she shot just 47/52. Wannithilake and Sethukavalar had a 100% success rate but they took just 3 of the 55 shots on goal, putting a big question mark on Coach Thilaka Jinadasa’s ‘long lob to Tharjini’ strategy.

The Northern Irish had a lower total success rate with shots but having made 25 more attempts on goal than their opponents, they were able to ultimately register a comfortable win. 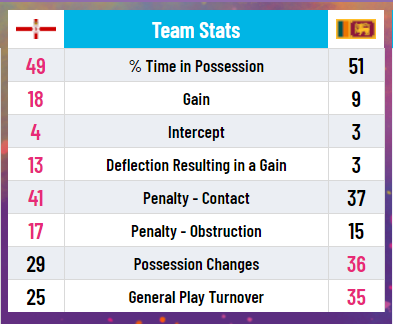