Sri Lanka put on a spirited effort in their opening game of the Vitality Netball World Cup 2019, but ultimately fell short by 30 goals as the game at M&S Bank Arena, Liverpool ended 79- 49 in favour of Zimbabwe.

The Lankans fought all the way through the game, but lost momentum in the final quarter as Zimbabwe ran riot.

Sri Lanka had the game’s maiden centre pass but a turnover saw the Africans draw first blood. They did not take a backward step however, as they were able to affect a turnover of their own and then score off their own centre pass to go ahead 2-1 early on in the game.

The opening few minutes of the 1st quarter were tense, with 1-2 goals separating the two sides. However, the tables turned in the latter half of the 1st quarter as Zimbabwe pulled away from the Lankans to go into the break ahead 19-14.

The 2nd quarter saw a more intense Sri Lanka take the court as they roared back to 23-22 with within the first 5 minutes of the quarter. A key change for Sri Lanka was what brought about a turn of fortunes as Coach Thilaka Jinadasa switched Wing Attack Dulangi Wannithilake to Goal Attack in place of Hasitha Mendis, pulling the latter out of the game.

Unfortunately, the Sri Lankans could not keep up the momentum from that point on and conceded a 9 goal lead by the end of the 1st half.

A resurgent Sri Lanka fought all the way in the 3rd quarter, changing up their attacking strategy as Wannithilake looked to take more shots on goal as opposed to passing everything to Sivalingam.

The tactic seemed to work in distracting the Zimbabwe defenders, who had thus far only looked to guard Sivalingam in the shooting circle. A late surge saw Sri Lanka close in on Zimbabwe, but the Africans still won the quarter 15-13 and surged ahead 53-42 overall.

Sivalingam was still shooting at 100%, gave Sri Lanka some hope, but Zimbabwe went for the kill in the final quarter, leaving Sri Lanka in the dust. A completely dominant performance from Zimbabwe’s shooter, Player of the Match Joice Takaidza swung the game in their favour as they took the quarter 26-7.

Sri Lanka shot at a stunning 99% accuracy, making 49 of the 50 shots they took – Tharjini Sivalingam as expected took the majority of shots, making 44/45 while Dulangi Wannithilake, on her World Cup debut made 5/5. 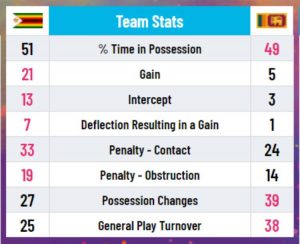 Speaking after the game, Head Coach Thilaka Jinadasa said, “The defenders couldn’t force the turnovers, so that made them very frustrated. There were many unforced errors and that cost us. But I personally think we fought back well. We were lacking momentum in the 4th quarter and we found it hard to get into our usual rhythm and the defenders were not much help from the other end.”

Sri Lanka will face Northern Ireland tomorrow, at 1.55pm (SL Time) while Zimbabwe will face World No. 1 Australia. The top 3 teams from the group will go through to the next round.

Genocide, Streakers, pitches and gloves that coloured the CWC 19