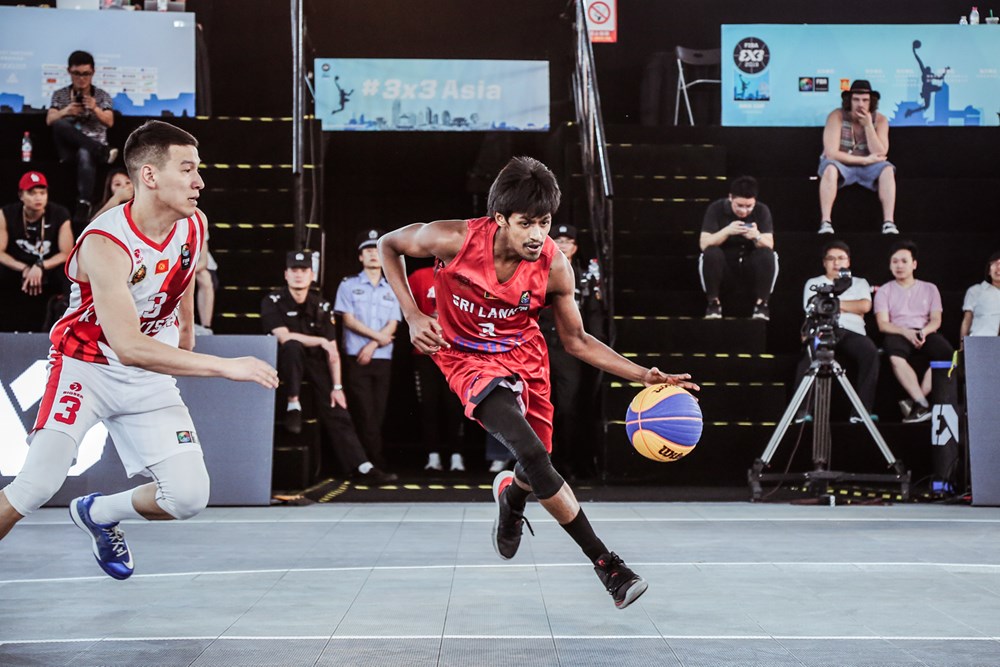 The Sri Lanka Men`s 3×3 basketball team did not have the best outing in the 2019 edition of the FIBA 3×3 Asia Cup 2019. Even though the Islanders return winless, they fought bravely on the court with Pawan Gamage, leading gallantry from the front. From Changsha, China, Gamage shared his experiences with ThePapare.com.

Those are his career statistics, but, his heart is 10x bigger than all of those combined. Playing some prodigious minutes of basketball, Gamage scored 11-points out of 17 points Sri Lanka scored in the final match against Vietnam.

In three short words; he was exceptional. From rebounding to blocking, lay-ups to jumpers, hustle to court-movement, Gamage executed the strategies excellently. It was unfortunate that he lacked a bit of support from his team-mates which could have turned things for the Islanders.

Gamage speaking about the Vietnam game said, “The opponents were bigger and stronger than us, but, their cross-court movements were very slow. I quickly recognized that and it made me realize it was their biggest weakness. I used my speed and executed the game-plans we had practiced, because of their slow movement, I was able to score and play well”.

FIBA 3×3, the international body of 3×3 basketball, applauded Gamage`s talent, posting his heroics on their official social media platform in the match vs. Kyrgyzstan. Grabbing a couple of boards, out-shining, Kyrgyzstani players who are almost twice his size, helped Sri Lanka stay alive in the match.

“We are shorter in comparison to them, that is a fact. So, we trained to improve our jumping ability and to play with more pace. It was all about timing the jump and having complete awareness and focus in the game” added Gamage.

The basketballer is 22 years of age with a formidable career ahead of him. ThePapare.com questioned him on the experience he gained out of the tournament and what helped him perform in this manner.

“It was a great experience playing against these top-nations of the country. It helps you to understand that there is a lot to improve in your own personal game. It adjusts yourself to play a tougher and quicker game of basketball.

Basketball is a team game. Even though I scored 11-points I wouldn`t have been able to do that without my team-mates. For me to score, the passes have to be accurate. If I did rebound, I should have someone to pass to, so it was the team`s confidence, unity and moral that helped me to perform”.

It was a young team that represented Sri Lanka for the 2019 edition of the Asian Championship. Together with Arnold Brent, Sri Lanka`s #1 ranked player, it was Kisal Cooray, Pawan Gamage and Gayan De Croos who donned the national jersey.

Kisal Cooray, his team-mate speaking about Gamage’s performance said, “Pawan played a spectacular game against Vietnam. He showed his full potential in the Vietnam game. We can take a lot of positives from him. He stepped up when we needed him the most. He’s a really valuable asset to Sri Lankan basketball.”

Gamage’s final words are encouraging ones for Sri Lanka Basketball as a whole “I would like to invest more time to improve my game and I am hoping to be within the first 100 players of the world”.