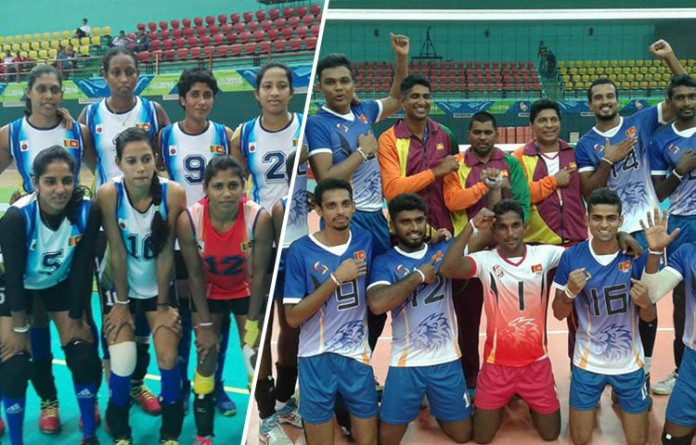 Sri Lanka Volleyball Men’s team and Women’s team were beaten by India in the finals as they collected Silver Medals at the 2016 South Asian Games.

Captain Gurinder Singh and the seasoned Prabagaran provided the impetus against a determined Sri Lanka. India won the first set 25-19 with relative ease.

Sri Lanka switched to a more attacking mode in the second, establishing a 7-4 lead first and 18-16 later.

With the tall G. R. Vaishnav making his presence felt at the net, India came up with effective blocks and followed it up with winning smashes from Prabagaran and Naveen Raja Jacob to reel off five consecutive points. The host sustained the momentum to win the game 25-22.

In the third, Sri Lanka took an 8-5 lead as Shamil Silva and Deepthi Romesh produced some spectacular smashes to leave the Indian defence in tatters. Sri Lanka had game-point at 24-22, but the confident Indians were in no mood to give up.

A solid block and a good finish from Jacob made it 24-24 before India cashed in on the initiative to win 28-26.

In the semifinal Sri Lanka defeated Pakistan after going down meekly in the first set 17-25. The islanders won the next three sets against a strong Pakistan side 25-23, 25-22, 25-20.

Sri Lanka were drawn in Group A alongside Nepal and India while in Group B it was Pakistan, Bangladesh, Afghanistan and Maldives.

Sri Lanka gave a fight to India in the 2nd set keeping the scores close but lost energy in the 3rd as India cruised to victory.

The women were drawn in Group B with Afghanistan and Nepal.

Sri Lanka Women’s team won the first set against Nepal 25-19 after a close tussle but eased through in the 2nd set winning 25-14. However with nothing to lose Nepal gave their all and the scores were tied at the 25 point mark but Sri Lanka calmed the nerves winning the 3rd set 28-26.