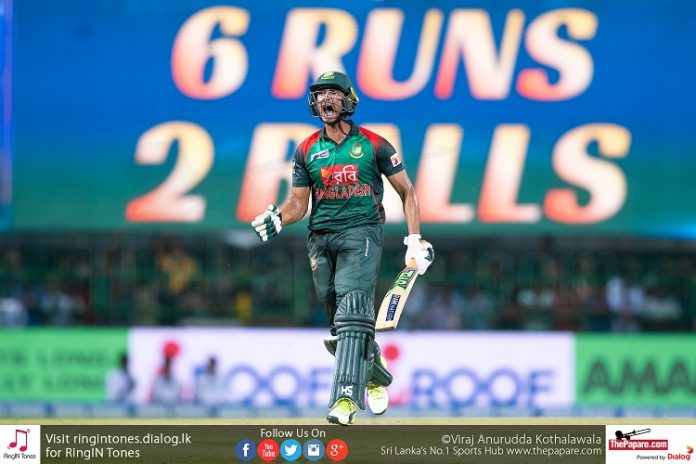 Sri Lanka lost their final game of the Nidahas Trophy to Bangladesh by 2 wickets to be knocked out of the championship as the Tigers clinched their spot in the final alongside India.

Chaos ensued in the final few moments of the game with Bangladesh skipper Shakib Al Hasan threatening to call his batsmen off the field seemingly due to a dispute regarding the height of Isuru Udana’s 2nd delivery of the final over. Play continued nonetheless after a few words were exchanged by the players from both sides and Mahmudullah, the man of the moment, took just 3 deliveries to slam the 12 runs the Tigers needed off the next four balls.

The chase swung from advantage Sri Lanka, to advantage Bangladesh several times, particularly after the dismissal of Mushfiqur Rahim in the 13th over as Sri Lanka clawed back into the match after Rahim and Tamim Iqbal had put on 64 runs for the 3rd wicket.

Nuwan Pradeep limped off the field after one over, meaning that Sri Lanka were short of one of their frontline bowlers, but those filling in, particularly Danushka Gunathilake and Jeewan Mendis did an excellent job, picking up 2 key wickets between them just as it was looking like Bangladesh would get home in a canter.

Akila Dananjaya made the early inroads, picking up Liton Das and Sabbir Rahman but the partnership for the 3rd wicket put Bangladesh well on track. Then came the panic from the Tigers as they went into the final 8 overs with 65 to get and 8 wickets intact.

Rahim, Tamim, Sarkar and Shakib fell within the space of the next 5 overs but Sri Lanka couldn’t dismiss Mahmudullah, who turned out to be the difference between the teams, making 43 off 18.

Earlier in the game, Sri Lanka, bringing in Isuru Udana and Amila Aponso in place of Dushmantha Chameera and Suranga Lakmal, were sent into bat by Bangladeshi skipper Shakib Al Hasan. Things did not start well for the hosts as both openers Kusal Mendis and Danushka Gunathilake could not get off to a flier, like they had in all three of Sri Lanka’s previous Nidahas Trophy games. Gunathilake succumbed to the pressure build by the Bangladeshis, hitting one high up in the air to give Shakib a wicket on his return after an injury layoff.

In-form batsman Kusal Mendis fell to Mustafizur Rahman soon after and when Upul Tharanga was run-out after a mid-pitch mix-up between himself and Kusal Perera, Sri Lanka would have been ruing their decision to go with the extra bowler in this game. Jeewan Mendis and Dasun Shanaka did not make much of an impact with the bat once again as the onus fell on the two Perera’s, Kusal and Thisara.

The pair put on 97 for the 6th wicket and despite both of them being dismissed in the latter part of the innings, Sri Lanka managed to put up a competitive 159 in their 20 overs.

Kusal Perera made 61 off 40 deliveries while Thisara, who had at one stage been on 20 off 20 deliveries, went onto to score 58 runs in just 37 deliveries.

In the end, it did not prove to be enough and although Sri Lanka did go down with a fight, the hosts will no doubt be disappointed at being unable to beat Bangladesh on both occasions they met during the tournament.

Bangladesh will now play India in the final of Nidahas Trophy on Sunday 18th of March at the same venue.