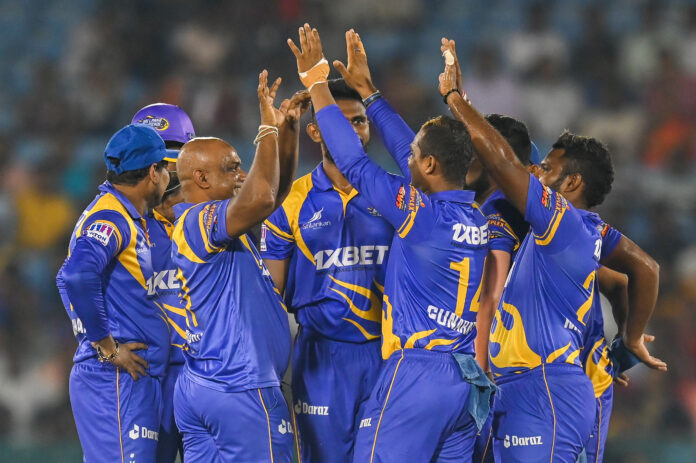 West Indies skipper Brian Lara won the toss and invited the islanders to take the first lease of the wicket. The left-handed duo Sanath Jayasuriya and Mahela Udawatte opened the innings for Sri Lanka and added quick-fire 26 runs in 2.3 overs before the latter was caught behind for 15 runs.

Jayasuriya was also looking impressive but his stay at the crease cut short as he was trapped in front after making 26 runs off 19 balls with 3 fours.

After the dismissals of the opening pair, Sri Lanka lost three more wickets in quick succession in the skipper Tillakaratne Dilshan, Upul Tharanga and Chamara Silva putting chaos in the middle order.

However, the all-rounders in the side Ishan Jayaratne and Jeevan Mendis played two vital cameos helping Sri Lanka post a competitive score of 172 runs on the board. Jayaratne stroked 31 runs off 19 balls with a four and 2 sixes while Mendis chipped in with 25 runs off 13 balls with 3 fours and a six.

In reply, West Indies got off to a good start posting 65 runs for 1 wicket within the first 8 overs. But Sri Lanka managed to fightback claiming 3 wickets in 7 balls putting Windies onto the backfoot at 68/4.

The old wily customer Sanath Jayasuriya showed his class with the ball once again taking 2 back-to-back wickets. West Indies No. 3 batter Narasingh Deonarine tried his best to put his team over the line with a brilliant knock of 63 runs off 39 balls which consisted 4 fours and 4 sixes, but Sri Lankan bowlers’ death bowling once again stood out in the tournament as they held they held their nerves at the end to clinch a 14-run win.

With this win, Sri Lanka Legends managed to qualify for the final of Road Safety World Series for the second time in a row. Sri Lanka Legends will meet India Legends today (01st October) in the final of the tournament at the same venue. Interestingly, it will be a rematch of the finalists of the last edition as they met in the inaugural Road Safety World Series final last year, where India Legends claimed a 14-run win to become champions of the tournament.