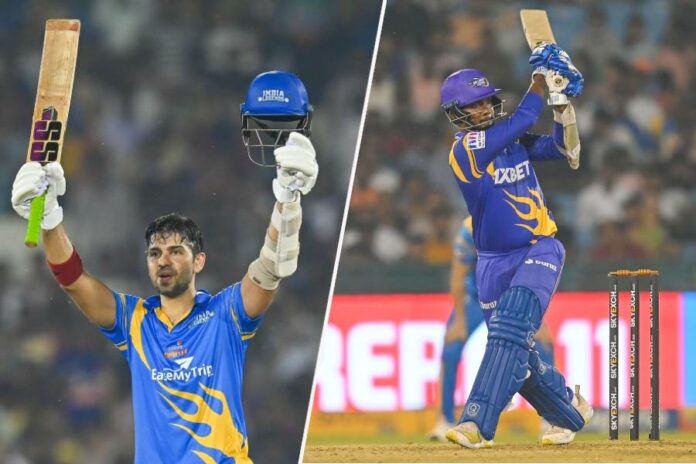 India Legends emerged champions of the 2nd edition of the Road Safety World Series as they defeated Sri Lanka Legends by 33 runs in the final of the tournament played yesterday (01st October) at Shaheed Veer Narayan Singh International Stadium, Raipur.

After winning the toss, Indian skipper Sachin Tendulkar opted to bat first making one change to their playing XI, bringing Vinay Kumar in the place of Munaf Patel. Sri Lanka on the other hand made 2 changes to their playing XI bringing in Dilshan Munaweera and Dhammika Prasad replacing Chamara Silva and Chathuranga de Silva.

The seamer Nuwan Kulasekara opened the bowling for Sri Lanka and got the team off to a terrific start with the ball removing the opposition skipper Tendulkar and No. 3 batter Suresh Raina in two consecutive overs in the powerplay.

Indian think tank made a strange move sending Vinay Kumar at No. 4 as the pinch hitter and it paid off for the hosts as he and Ojha revived the innings building a 90-run partnership from 51 balls for the 3rd wicket.

Sri Lankan bowlers managed to take wickets at regular intervals thereafter but the opening batter Ojha continued his assault with the bat scoring a brilliant century for India Legends. Ojha who carried his bat till the end of innings scored 108 runs off 71 balls with 15 fours and 2 sixes at a strike rate of 152.11.

For Sri Lanka, the two seamers Nuwan Kulasekara and Isuru Udana starred with the ball sharing 5 wickets between them.

Sri Lanka got off to a poor start losing the first 6 wickets for 85 runs reducing the hopes of chasing down the mammoth target of 196. However, Ishan Jayaratne and Mahela Udawatte who came to bat at No. 7 and 8 respectively brought some hope for the islanders as they added 63 runs off 31 balls for the 6th wicket.

But with their dismissals in two consecutive overs, Sri Lanka lost hopes as the asking rate was too high for the tail-enders to counter at the end. Nevertheless, Jayaratne’s blistering knock was a treat to watch as he raced to 51 runs off 22 balls with 4 fours and 4 sixes at a strike rate of 231.82.