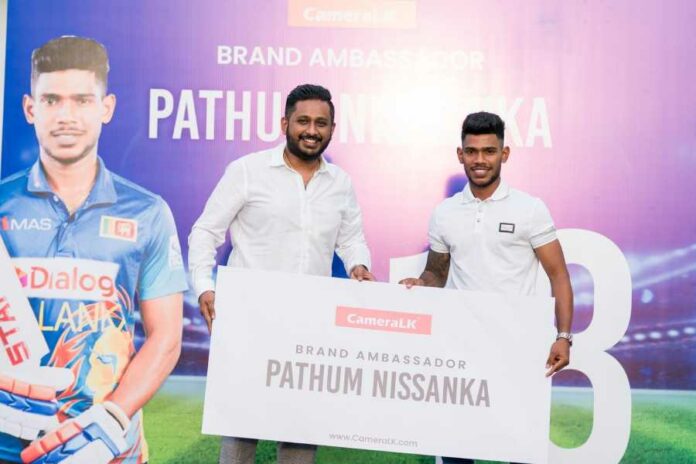 CameraLK, Sri Lanka’s leading camera store, has appointed highly-talented national cricketer Pathum Nissanka as the company’s Brand Ambassador as it outlines plans to expand into overseas markets. This partnership is the first time CameraLK is joining hands with a cricketer as the brand ambassador.

Pathum Nissanka and CameraLK have been partners since January this year as CameraLK was the official bat sticker partner of the young cricketer. With Pathum being appointed as the brand ambassador CameraLK is planning to capitalize on his growing popularity in Sri Lanka to carry out social service activities and other initiatives.

Having made his Sri Lanka national team debut in March 2021 in the West Indies, Pathum Nissanka has delivered consistently on the field and performed admirably during the recently- concluded Asia Cup with significant contributions throughout the tournament to help Sri Lanka bring home the trophy. Pathum scored a century on his Test debut and currently sits in the Top 10 of ICC T20I batting rankings. He also holds the record for the highest ODI individual score for a Sri Lankan against Australia.

Pathum’s rise to the top has captured the imagination of the entire nation and especially the cricket-loving public. During his relatively short yet impressive career, he has demonstrated his cricketing prowess in all three formats of the game, playing his role well and delivering consistent results to ensure the team’s success. He has proved that he is someone who can take Sri Lanka’s name to the global stage as a talented cricketer and along similar lines CameraLK is a company that is attempting to take Sri Lanka to the global level in the photography equipment market.

Expressing his views, Anushka Gunasinghe – Founder/Managing Director of CameraLK stated, “Pathum Nissanka is a generational talent and having someone like him as our brand ambassador is truly a key moment in CameraLK’s journey as the No.1 camera store in Sri Lanka. His amazing ability to stay calm and collected amidst any chaos, withstand long phases of intense pressure and overcome all challenges as a cricketer is very similar to how CameraLK became a force to be reckoned with in the industry over the years. Having worked with him already for several months and seeing how dedicated, down-to-earth and professional he is, we thought Pathum would be the perfect fit as our brand ambassador. We are confident that this new partnership will be the beginning of something exceptional and will result in another special inning for Sri Lanka.”

Founded in 2010, CameraLK is South Asia’s largest camera retail store and also the largest online store. CameraLK has long been known in the Sri Lankan photographic industry as the source for the best and newest products, informed imaging experts, outstanding customer service and competitive pricing. CameraLK carries over 5,000 products in stores across Sri Lanka, and on www.cameralk.com from such major manufacturers as Canon, Nikon, Sony, Sigma, Tamron, Tokina, DJI, GoPro, Profotto and Wescott.